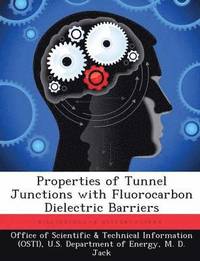 av M D Jack, Office Of Scientific & Technical Informa
Häftad Engelska, 2013-02-01
589
Köp
Spara som favorit
Skickas inom 10-15 vardagar.
Fri frakt inom Sverige för privatpersoner.
Thesis. The electrical characteristics of In/I/In and In/I/Pb superconducting tunnel junctions have been studied in detail. Since In does not readily form pinhole free oxide layers, a thin insulating dielectric was formed on freshly deposited In film by passing an electric discharge through an atmosphere of fluorocarbon gas. Junctions were then completed by depositing a thin counter electrode of In or Pb. The same process was used to prepare high resistance junctions with Au as the base electrode; these were not however, studied in detail. In/I/In and In/I/Pb junctions were produced with resistances in the range 0.01 ohms to 10/sup 10/ ohms at liquid helium temperatures. Low resistance junctions exhibited nonlinear electrical characteristics associated with good quality oxide'' superconducting junctions including (a) the dc Josephson effcct, (b) quasiparticle tunneling characteristics. (c) phonon structure and (d) inelastic tunneling phenomena. The magnitude of the Josephson current for In/I/In junctions agreed to within a few percent of the value predicted by strong coupling theory. Current voltage (I-V) and first and second derivative curves for In/I/In and In/I/Pb were compared with curves for Al/I/In and Pb/I/Pb junctions. Discrepancies between the characteristics can be, for the most part, explained on the basis of existing theories of phonon mediated superconductivity using recent data from inelastic neutron scattering studies of In. Nonlinear structure at voltages below the phonon spectrum was observed and is most likely associated with Kohn singularities. At higher voltages, second derivative curves exhibited resonances characteristic of CH and OH impurities in the barrier as well as a complex spectrum associated with the vibrational spectrum of the fluorocarbon dielectric. To better characterize this dielectric, a variety of surface analytic techniques were used to determine the complex index of refraction, the chemical composition and chemical homogeneity of the barrier. I-V curves for high resistance junctions were used to determine the potential at the metal-insulator interface.
Visa hela texten