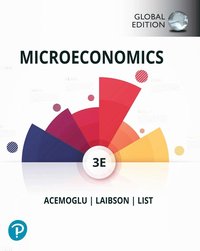 av Daron Acemoglu
Häftad Engelska, 2021-06-25
839
Köp
Spara som favorit
For courses in the principles of microeconomics. An evidence-based approach to economics Throughout Microeconomics, 3rd Edition, authors Daron Acemoglu, David Laibson, and John List use real economic questions and data to help you learn about the world around you. Taking a fresh approach, they use the themes of optimisation, equilibrium, and empiricism to not only illustrate the power of simple economic ideas, but also to explain and predict what's happening in today's society. Each chapter begins with an empirical question that is relevant to the life of the reader, and is later answered using data in the Evidence-Based Economics feature. As a result of the text's practical emphasis, you learn to apply economic principles to guide the decisions you make in your own daily life.
Visa hela texten

Daron Acemoglu is the Elizabeth and James KillianProfessor of Economics in the Department of Economics at the MassachusettsInstitute of Technology. He has received a BA in economics from the Universityof York, an MSc in mathematical economics and econometrics from the LondonSchool of Economics, and a PhD in economics from the London School ofEconomics. He is an elected fellow of the National Academy of Sciences, theAmerican Academy of Arts and Sciences, the Econometric Society, the EuropeanEconomic Association, and the Society of Labor Economists. He has receivednumerous awards and fellowships, including the inaugural T. W. Schultz Prizefrom the University of Chicago in 2004, the inaugural Sherwin Rosen Award foroutstanding contribution to labor economics in 2004, the Distinguished ScienceAward from the Turkish Sciences Association in 2006, and the John von NeumannAward, Rajk College, Budapest, in 2007. He was also the recipient of the John Bates Clark Medal in 2005,awarded every two years to the best economist in the US under the age of 40 bythe American Economic Association, and the Erwin Plein Nemmers Prize, awardedevery two years for work of lasting significance in economics. He holdshonorary doctorates from the University of Utrecht and Bosporus University. His research interests include political economy, economicdevelopment and growth, human capital theory, growth theory, innovation, searchtheory, network economics, and learning. His books include Economic Origins of Dictatorship andDemocracy (jointly with James A. Robinson), which was awarded theWoodrow Wilson and the William Riker prizes, Introduction to ModernEconomic Growth, and Why Nations Fail: The Origins ofPower,Prosperity, and Poverty (jointly with James A. Robinson), which hasbecome a New York Times bestseller. David Laibson is the Chair of the HarvardEconomics Department and the Robert I. Goldman Professor of Economics atHarvard University. He holds degrees from Harvard University (AB in economics),the London School of Economics (MSc in econometrics and mathematicaleconomics), and the Massachusetts Institute of Technology (PhD in economics). He is also a member of the National Bureau of Economic Research,where he is Research Associate in the Asset Pricing, Economic Fluctuations, andAging Working Groups. His research focuses on the topics of behavioraleconomics, intertemporal choice, macroeconomics, and household finance, and heleads Harvard University's Foundations of Human Behavior Initiative. He serves on several editorial boards, as well as the PensionResearch Council (Wharton), Harvard's Pension Investment Committee, and theBoard of the Russell Sage Foundation. He has previously served on the boards ofthe Health and Retirement Study (National Institutes of Health) and theAcademic Research Council of the Consumer Financial Protection Bureau. He is a recipient of a Marshall Scholarship and a Fellow of theEconometric Society and the American Academy of Arts and Sciences. He is also arecipient of the T. W. Schultz Prize from the University of Chicago and theTIAA-CREF Paul A. Samuelson Award for Outstanding Scholarly Writing on LifelongFinancial Security. In recognition of his teaching excellence, he has beenawarded Harvard's Phi Beta Kappa Prize and a Harvard College Professorship. John A. List is the Kenneth C. GriffinDistinguished Service Professor in Economics at the University of Chicago, andChairman of the Department of Economics. He received his BS in economics fromthe University of Wisconsin-Stevens Point and his PhD in economics from theUniversity of Wyoming. Before joining the University of Chicago in 2005, he wasa professor at the University of Central Florida, University of Arizona, andUniversity of Maryland. He also served in the White House on the Council ofEconomic Advise

PART I: INTRODUCTION TO ECONOMICS 1. The Principles and Practice of Economics 2. Economic Science: Using Data and Models to Understand the World 3. Optimization: Trying to Do the Best You Can 4. Demand, Supply, and Equilibrium PART II: FOUNDATIONS OF MICROECONOMICS 5. Consumers and Incentives 6. Sellers and Incentives 7. Perfect Competition and the Invisible Hand 8. Trade 9. Externalities and Public Goods 10. The Government in the Economy: Taxation and Regulation 11. Markets for Factors of Production PART III: MARKET STRUCTURE 12. Monopoly 13. Game Theory and Strategic Play 14. Oligopoly and Monopolistic Competition PART IV: EXTENDING THE MICROECONOMIC TOOLBOX 15. Trade-offs Involving Time and Risk 16. The Economics of Information 17. Auctions and Bargaining 18. Social Economics