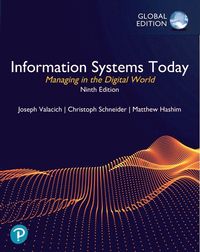 Joseph (Joe) Valacich isthe Eller Professor of MIS within the Eller College of Management at theUniversity of Arizona, and a co-founder, Chairman, and Chief Science Officer(CSO) of Neuro-ID, Inc. He was previously on the faculty at Indiana University,Bloomington, and Washington State University, Pullman. He has had visitingfaculty appointments at City University of Hong Kong, Buskerud College(Norway), the Helsinki School of Economics and Business, the NorwegianUniversity of Life Sciences, and Riga Technical University (Latvia). Hereceived a PhD degree from the University of Arizona (MIS) and MBA and BS(Computer Science) degrees from the University of Montana. Prior to his academiccareer, Dr. Valacich worked in the software industry in Seattle in both largeand start-up organizations. Dr. Valacich has served on various national task forcesdesigning model curricula for the information systems discipline,including IS 97, IS 2002, and IS 2010: TheModel Curriculum and Guidelines for Undergraduate Degree Programs inInformation Systems, where he was co-chairperson. He also served onthe task force that designed MSIS 2000 and 2006: TheMaster of Science in Information Systems Model Curriculum. He servedon the executive committee, funded by the National Science Foundation, todefine the IS Program Accreditation Standards and served onthe board of directors for CSAB (formally the Computing Sciences AccreditationBoard) representing the Association for Information Systems (AIS). He was thegeneral conference co-chair for the 2003 International Conference onInformation Systems (ICIS) and the 2012 Americas Conference on InformationSystems (AMCIS); both were held in Seattle. He is the Honorary Conference Chairfor ICIS 2021 in Austin, Texas. Dr. Valacich has conducted numerous corporate training andexecutive development programs for organizations, including AT&T, Boeing,Dow Chemical, EDS, Exxon, FedEx, General Motors, Microsoft, and Xerox. He hasserved in a variety of editorial roles within various academic journals andconferences. His primary research interests include human-computer interaction,deception detection, technology-mediated collaboration, mobile technologies,and e-business. He is a prolific scholar, having published more than 250scholarly articles in numerous prestigious journals and conferences,including: MIS Quarterly, Information Systems Research, ManagementScience, Academy of Management Journal, The Accounting Review, Journal of MIS,Decision Sciences, Journal of the AIS, Communications of the ACM,Organizational Behavior and Human Decision Processes, Journal ofApplied Psychology, and many others. He is a coauthor of the leadingtextbooks Modern Systems Analysis and Design (9th edition)and Information Systems Project Management: A Process Approach (2ndedition). Dr. Valacich has multiple issued and pending patentsfocusing on the analysis of fine-grained human-computer interaction data toinfer user intent, confidence, and emotional state. Software based on thiswork, commercialized by Neuro-ID, is being used by many of the world's leadingonline platforms, processing millions of customer interactions per month. He isa Senior Member of the National Academy of Inventors (2020), a DistinguishedAlumnus of the University of Montana (2012), and a Fellow of the Associationfor Information Systems (2009). In 2016, Dr. Valacich was awarded theUniversity of Arizona, Tech Launch Arizona, Innovation & Impact Award forInformation Technology discovery. Throughout his career, he has also wonnumerous teaching, service, and research awards. Christoph Schneider is anAssistant Professor in the Department of Information Systems at IESE BusinessSchool in Barcelona, Spain. He previously held faculty appointments at BoiseState University and City University of Hong Kong. He earned a Swiss HigherDiploma in Hotel Management at the University Centre Cesar Ritz in Brig,Switzerland, a BA in Hotel and Restaurant Administration at Washington StateUnive