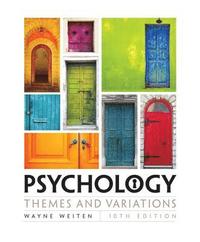 av Wayne Weiten
Inbunden Engelska, 2016-01-01
Studentlitteratur
2279
Köp
Spara som favorit
Skickas inom 3-6 vardagar.
Fri frakt inom Sverige för privatpersoner.
Finns även som
Visa alla 2 format & utgåvor
PSYCHOLOGY: THEMES AND VARIATIONS, 10th Edition, helps you experience the excitement of this fascinating field, while helping you study and retain what you learn. Filled with practical ways that you can apply psychology to your everyday life, this best-selling textbook is an experience in learning that youll remember long after you complete your introductory psychology course. Critical Thinking Applications in every chapter give you specific critical thinking strategies you can apply in all of your courses and in your personal life. Reality Checks, many of which may surprise you, address common misconceptions about psychology. Every chapter of this book offers tools -- such as Concept Charts that provide colorful visual snapshots of key points -- to help you focus on whats important, showing you how to study in ways that help you retain information and do your best on exams.
Visa hela texten

Wayne Weiten is a graduate of Bradley University and received his Ph.D. in social psychology from the University of Illinois, Chicago in 1981. He has taught at the College of DuPage and Santa Clara University, and currently teaches at the University of Nevada, Las Vegas. He has received distinguished teaching awards from Division Two of the American Psychological Association (APA) and from the College of DuPage. He is a Fellow of Divisions 1, 2, and 8 of the American Psychological Association and a Fellow of the Midwestern Psychological Association. In 1991, he helped chair the APA National Conference on Enhancing the Quality of Undergraduate Education in Psychology. He is a former President of the Society for the Teaching of Psychology and the Rocky Mountain Psychological Association. In 2006, one of the five national teaching awards given annually by the Society for the Teaching of Psychology was named in his honor. Weiten has conducted research on a wide range of topics, including educational measurement, jury decision-making, attribution theory, pressure as a form of stress, and the technology of textbooks. He is also the co-author of PSYCHOLOGY APPLIED TO MODERN LIFE: ADJUSTMENT IN THE 21st CENTURY (with Dana S. Dunn and Elizabeth Yost Hammer, Cengage, 2015, 11th Edition). Weiten has created an educational CD-ROM titled PsykTrek: A Multimedia Introduction to Psychology and he recently co-authored a chapter on the Introductory Psychology course for THE OXFORD HANDBOOK OF PSYCHOLOGY EDUCATION (Weiten & Houska, 2015).