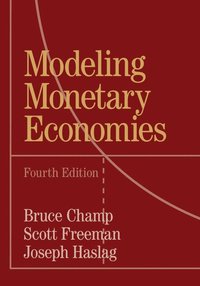 av Bruce Champ
Häftad Engelska, 2016-05-09
459
Köp
Spara som favorit
Skickas inom 10-15 vardagar.
Fri frakt inom Sverige för privatpersoner.
Finns även som
Visa alla 6 format & utgåvor
Too often monetary economics has been taught as a collection of facts about institutions for students to memorize. By teaching from first principles instead, this advanced undergraduate textbook builds on a simple, clear monetary model and applies this framework consistently to a wide variety of monetary questions. Starting with the case in which trade is mutually beneficial, the book demonstrates that money makes people better off, and that government money competes against other means of payments, including other types of government money. After developing each of these topics, the book tackles the issue of money competing against other stores of value, examining issues associated with trade, finance, and modern banking. The book then moves from simple economies to modern economies, addressing the role banks play in making more trades possible, concluding with the information problems plaguing modern banking, which result in financial crises.
Visa hela texten

'This is my favorite textbook for my undergraduate course in monetary economics. It requires only a small investment in order to familiarize the students with the overlapping generations model. Thereafter, the book covers a broad set of topics by building simple extensions of the basic model. My students love it and I can also highly recommend it to any reader interested in money, banking, and monetary policy.' Aleksander Berentsen, Universitt Basel, Switzerland

'In this book, Professor Haslag, a first-rate economist with a theoretical bent, takes the reader into the landscape of modern monetary economics to help us make sense of the deep questions: what does money do? Why do we have money? Why is banking important? Why is inflation bad? And many others. The book uses the overlapping generations model as its workhorse to study a vast range of issues such as money supply, inflation, financial intermediation and banking, and payments systems. The writing, as always, is lucid, precise, and engaging. I can think of no other undergraduate textbook in macro- or monetary economics that infects the reader with as much passion for the craft of economics as this one.' Joydeep Bhattacharya, Iowa State University

'This book is the most rigorous and accessible treatment of monetary issues based on dynamic, micro-founded models of monetary exchange for advanced undergraduate students. It answers fundamental questions: why is fiat money valued? Can money coexist with interest-bearing assets? What is the role of banks and central banks? It also addresses topical questions relative to payment systems, liquidity risk, and the effects of the national debt on future growth. It is a must-read for all students eager to learn advanced monetary economics.' Guillaume Rocheteau, University of California, Irvine