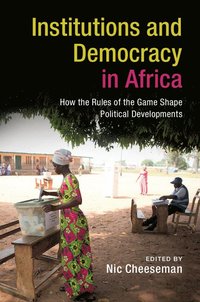 Institutions and Democracy in Africa

How the Rules of the Game Shape Political Developments

av Nic Cheeseman
Häftad Engelska, 2018-02-22
299
Köp
Spara som favorit
Skickas inom 10-15 vardagar.
Fri frakt inom Sverige för privatpersoner.
Finns även som
Visa alla 3 format & utgåvor
Historically, African political institutions such as constitutions, legislatures and judiciaries have been seen as weak and vulnerable to manipulation, leading some to claim that the continent is 'institutionless'. However, recent developments including the consolidation of presidential term limits in a number of countries demonstrate that this depiction is no longer tenable. By drawing attention to how institutions can shape the practice of politics, this book demonstrates that electoral commissions, economic regulations and systems of land tenure are vital to our understanding of contemporary Africa. A series of cutting-edge contributions from leading scholars explain how the rules of the game shape political developments across the continent, from Kenya to Nigeria and from Benin to South Africa. In chapters that cover bureaucracies, constitutions, elections, political parties, the police and more, the authors argue that a new research agenda is required if we are to better understand the process of democratisation.
Visa hela texten

Nic Cheeseman is Professor of Democracy at the University of Birmingham and was formerly the Director of the African Studies Centre at the University of Oxford. He is the recipient of the GIGA award for the best article in Comparative Area Studies (2013) and the Frank Cass Award for the best article in Democratisation (2015). He is also the author of Democracy in Africa: Successes, Failures and the Struggle for Political Reform(Cambridge, 2015), the founding editor of the Oxford Encyclopaedia of African Politics,a former editor of the journal African Affairs and an advisor to, and writer for, Kofi Annan's African Progress Panel.