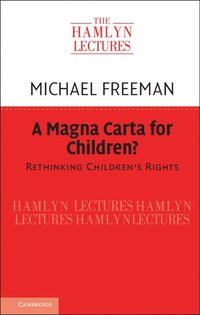 A Magna Carta for Children?

av Michael Freeman
Häftad Engelska, 2020-10-01
335
Köp
Spara som favorit
Skickas inom 10-15 vardagar.
Fri frakt inom Sverige för privatpersoner.
Beställ senast idag kl 17:30 för leverans innan jul!
Finns även som
Visa alla 2 format & utgåvor
The UN Convention on the Rights of the Child is the most widely ratified human rights treaty in the world, yet everyday children still face poverty, violence, war, disease and disaster. Are the rights we currently afford to children enough? Combining historical analysis with international human rights law, Michael Freeman considers early legal and philosophical theories on children's rights before exploring the impact and limitations of the Convention itself. He also suggests ways that we may rethink children's rights in the future as well as identifying key areas for reform. This book will appeal to an interdisciplinary audience who are interested in children's rights, children's studies, the history of childhood, international human rights, and comparative family law. It is a crucial restatement of the importance of law, policy and rights in improving children's lives.
Visa hela texten

'In this book, which is based on his 2015 Hamlyn Lectures, Michael Freeman embarks on an account of children's rights which is astonishing in its breadth and depth. No aspect is neglected, from the historical origins of the idea to the most contemporary issues in which children's rights are implicated. These are many, including globalisation, social inequality, migration, even climate change. The coverage is also global, with special attention given to South America and Africa. Freeman draws not only on law and legal theory, but also on other disciplines, such as sociology and neuroscience. But references to the UN Convention on the Rights of the Child are interwoven throughout the text. Ultimately, however, it is an uncompromisingly political statement about children and the realities of the political and social world in which they live, and what still needs to be done to treat them properly.' John Eekelar, University of Oxford

'I was delighted to hear that the 2015 Hamlyn lectures were to be given by the world's leading international children's rights scholar, Professor Michael Freeman. The three lectures, collated and expanded in this book, provide a fascinating and engaging overview of the theory and practice of children's rights. They are presented in Professor Freeman's inimitable style and draw on his encyclopaedic knowledge of the field. It is a must read for any scholar or student of children's rights.' Laura Lundy, Queen's University, Belfast

'As a staunch and passionate advocate for children and their human rights, MichaelFreeman's inspirational writings motivate enlightened legal and attitudinal change. His Hamlyn lectures raise important, thought-provoking questions to which he provides eloquent, witty and progressive responses. Through his profound wisdom and empathy, he lays the foundations for a more just and nurturing world for children.' Bernadette Saunders, Monash University, Australia

Prelude; Part I. 1. Are children human?; 2. Interlude - taking a deep breath; Part II. Even Lawyers Were Children Once: 3. The Convention on the Rights of the Child and its principles; 4. The Convention - norms and themes; 5. Enforcing children's rights; 6. Criticisms of the Convention; 7. Beyond the Convention; 8. Interlude - what we can learn from the sociology of childhood; 9. Childhoods and rights; 10. Regional children's rights; 11. Child friendly justice; 12. The world 25 years on: new issues and responses; Part III. A Magna Carta for Children: 13. Rethinking children's rights; 14. Alternatives to rights - or are they?; 15. A Magna Carta for children?; 16. Rethinking principles and concepts; 17. Conclusion; 18. Coda - a child of our time.