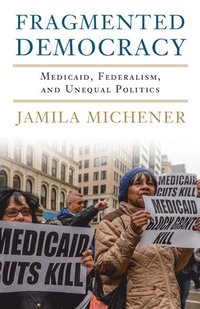 av Jamila Michener
Häftad Engelska, 2018-03-22
249
Köp
Spara som favorit
Skickas inom 10-15 vardagar.
Fri frakt inom Sverige för privatpersoner.
Finns även som
Visa alla 3 format & utgåvor
Medicaid is the single largest public health insurer in the United States, covering upwards of 70 million Americans. Crucially, Medicaid is also an intergovernmental program that yokes poverty to federalism: the federal government determines its broad contours, while states have tremendous discretion over how Medicaid is designed and implemented. Where some locales are generous and open handed, others are tight-fisted and punitive. In Fragmented Democracy, Jamila Michener demonstrates the consequences of such disparities for democratic citizenship. Unpacking how federalism transforms Medicaid beneficiaries' interpretations of government and structures their participation in politics, the book examines American democracy from the vantage point(s) of those who are living in or near poverty, (disproportionately) Black or Latino, and reliant on a federated government for vital resources.
Visa hela texten

'I have not read a book in a better part of a decade where I learned as much or where my ideas of American federalism were so usefully challenged. With incredibly keen insight and breathtaking analysis, Jamila Michener unearths the dire ramifications of how people-based policies intersect with place-based inequalities. Federalism may feed liberty but it also undermines equality, one of our nation's most cherished ideals. ... Fragmented Democracy will revive debates about democracy in America, federalism and its consequences, racialized poverty and political inequality, and the importance of place in political life. The message takes on urgent importance in our time, pushing us to reimagine the policy at the local, state, and national levels. ... An extraordinary achievement.' Vesla Mae Weave, Michael Bloomberg Distinguished Professor of Political Science and Sociology, The Johns Hopkins University

'This blockbuster book uses a rich, multi-method approach to examine the profound implications of federalism for American democracy. Due to the heterogeneity arising from giving policy responsibilities to state and local governments, the poor face extraordinarily varying levels of policy responsiveness and political incorporation, based on the lottery of where they happen to live. Everyone interested in poverty, inequality, and citizen participation should read this deeply creative and thought-provoking analysis.' Andrea Louise Campbell, Massachusetts Institute of Technology

'Jamila Michener has given scholars and citizens a great gift. Fragmented Democracy is a tour de force of empirical political analysis that doubles as an unusually humane and incisive meditation on the troubled state of American citizenship. ... Fragmented Democracy is a powerful work of critical, empirically grounded political analysis. It deserves to be widely read and discussed.' Joe Soss, Cowles Professor for the Study of Public Service, University of Minnesota

'Jamila Michener has written a powerful, engaging and urgent book that shows, with devastating clarity, the effects of our federal system on the political equality of tens of millions of Americans, particularly the poor and African-Americans.' Lisa L. Miller, Rutgers University, New Jersey

Jamila Michener is Assistant Professor of Government at Cornell University, New York. She is a leading expert in the study of poverty, racial inequality, politics and public policy in the United States. Her work has been supported by the Russell Sage Foundation, the National Science Foundation, the Robert Wood Johnson Foundation, and the Ford Foundation. She is a faculty affiliate at the Center for the Study of Inequality, a graduate field faculty member in the Africana Studies Department, a faculty affiliate in the American Studies Program, and an affiliate at the Cornell Population Center. As a publicly engaged scholar, Michener is also co-leader of the Finger Lakes Branch of the Scholars Strategy Network, sits on the advisory board of the Cornell Prison Education Program, and teaches regularly in local prisons. Prior to coming to Cornell, she received her Ph.D. in political science from the University of Chicago and completed a postdoctoral fellowship as a Health Policy Scholar at the University of Michigan.

1. Medicaid, political life and fragmented democracy; 2. Federalism, citizenship and contextualized policy feedback; 3. Federalism, healthcare and inequity: past and present; 4. The mis(education) of Medicaid beneficiaries in the American states; 5. Pushing back: particularistic resistance in county contexts; 6. Going local: people, places and social policy in the city; 7. Nothing about us, without us: policy advocacy in a fragmented polity; 8. Federalism, policy and political inequality; References; Appendix A: qualitative interviews; Appendix B: statistical tables; Index.