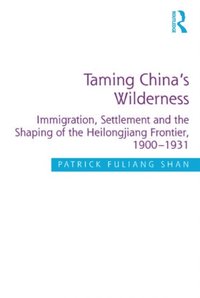 Immigration, Settlement and the Shaping of the Heilongjiang Frontier, 1900-1931

av Patrick Fuliang Shan
E-bok (EPUB - DRM), Engelska, 2016-04-01
489
Ladda ned
Spara som favorit
Laddas ned direkt
Läs i vår app för iPhone, iPad och Android
Finns även som
Visa alla 4 format & utgåvor
Until the beginning of the twentieth century, the Chinese province of Heilongjiang, historically known as Northern Manchuria, remained a sparsely populated territory on the northeastern frontier. For about two centuries, the rulers of the Qing dynasty (1644-1912) - whose historical homeland was in Manchuria - enforced a policy that prohibited Chinese immigration and settlement and maintained the region's reputation as the Great Northern Wilderness. Yet, as this new study demonstrates, by the early 20th century the Chinese government reversed its previous policy and began to encourage immigration into Heilongjiang, turning a backwater into a thriving frontier region. Covering the period between the reversal of the anti-immigration policy around 1900 and the Japanese occupation of Heilongjiang in 1931, this book investigates this distinctive frontier and the impact upon it of the settlement of four million Chinese settlers during a thirty-one year period. Following an introduction providing a background to the period covered, the study is divided into five chapters. The first chapter looks at patterns of immigrations, settlement and the features of the newly developing frontier society. Chapter two then deals with land possession, tenure and relations amongst the newly arrived settlers. The third chapter discusses the transformation of the ethnic make-up of the region, and the move from a largely nomadic culture to one of settled farmers. Chapter four probes the social problems these changes caused, particularly banditry. The final chapter revises commonly held notions about Russian dominance of the region, arguing that Russia's influence was limited to the railway zone. Taken together, these chapters not only provide an overview of a territory undergoing rapid and sustained change, but also provide insights into wider Chinese history, as well as adding to the on-going scholarly interest in border and frontier studies.
Visa hela texten