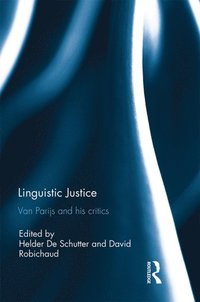 Van Parijs and his Critics

av Helder De Schutter, David Robichaud
E-bok (EPUB - DRM), Engelska, 2017-10-02
549
Ladda ned
Spara som favorit
Laddas ned direkt
Läs i vår app för iPhone, iPad och Android
Finns även som
Visa alla 2 format & utgåvor
The world contains over 6000 languages and less than 200 states to accommodate them. This creates the important normative question of how to respond politically to linguistic diversity. What is a just language policy? Are language minorities entitled to language protection? Should language rights be accorded to immigrants? Is the universal rise of English as a lingua franca to be applauded or to be regretted? The most important and comprehensive thinker within this debate over linguistic justice is Philippe Van Parijs. In his bold and controversial theory of linguistic justice, Van Parijs argues that the rise of English is a good thing, as well as that all language groups are entitled to grab a territory on which only their language receives public recognition. This collection, bringing together some of the most influential contemporary political philosophers, presents a critical review of Van Parijs's theory and gives a state-of-the-art overview of the prevailing positions on linguistic justice within political philosophy. It will be of interest to students and scholars studying philosophy, politics, linguistics, international relations and law. This book was published as a special issue of Critical Review of International Social and Political Philosophy.
Visa hela texten