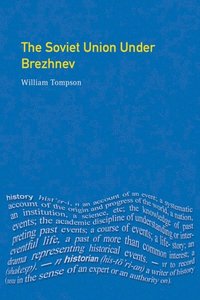 av William J Tompson
E-bok (PDF - DRM), Engelska, 2014-07-30
409
Ladda ned
Spara som favorit
Laddas ned direkt
Läs i vår app för iPhone, iPad och Android
Finns även som
Visa alla 3 format & utgåvor
The Soviet Union Under Brezhnev provides an accessible post-Soviet perspective on the history of the USSR from the mid-1960's to the mid-1980's. It challenges both the 'evil empire' image of the USSR that was widespread in the early 1980's and the 'stagnation' label attached to the period by Soviet reformers under Gorbachev.The book makes use of a range of memoirs, interviews, archival documents and other sources not available before 1990 to place Brezhnev and his epoch in a broader historical context. The author: examines high politics, foreign policy and policy making explores broader social, cultural and demographic trends presents a picture of Soviet society in the crucial decades prior to the upheavals and crises of the late 1980'sWhile stopping well short of a full-scale rehabilitation of Brezhnev, Tompson rejects the prevailing image of the Soviet leader as a colourless non-entity, drawing attention to Brezhnev's real political skills, as well as his faults, and to the systemic roots of many of the problems he faced.
Visa hela texten