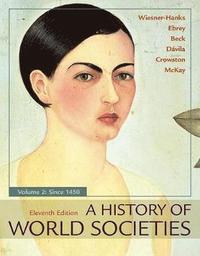 A History of World Societies, Volume 2

av Merry E Wiesner-Hanks, Patricia B Ebrey, Roger B Beck, Jerry Davila, Clare Haru Crowston
(1 röst)  |  Läs 1 recension
Häftad Engelska, 2017-10-25
549
Köp
Spara som favorit
A regional and global approach to world history that highlights society and culture Long praised by instructors and students for its accessible regional chapter structure, readability, and sustained attention to social history, the Eleventh Edition of A History of World Societies includes even more features and tools to engage today's students and save instructors time. This edition includes more help with historical thinking skills, an expanded primary source program in print and online, and the best and latest scholarship throughout The book can be purchased with the breakthrough online resource, LaunchPad, which combines an e-book with a wealth of time-saving teaching and learning tools. LaunchPad comes with LearningCurve, an adaptive and automatically graded learning tool that ensures students come to class prepared. Volume 2 includes Chapters 16-33
Visa hela texten

Merry E. Wiesner-Hanks (Ph.D., University of Wisconsin-Madison) taught first at Augustana College in Illinois, and since 1985 at the University of Wisconsin-Milwaukee, where she is currently UWM Distinguished Professor in the department of history. She is the coeditor of the Sixteenth Century Journal and the author or editor of more than twenty books, most recently The Marvelous Hairy Girls: The Gonzales Sisters and Their Worlds and Gender in History. She is the former Chief Reader for Advanced Placement World History. The Cambridge Illustrated History of China, as well as numerous monographs. In 2010 she won the Shimada Prize for outstanding work of East Asian Art History for Accumulating Culture: The Collections of Emperor Huizong. Roger B. Beck (Ph.D., Indiana University) is Distinguished Professor of African and twentieth-century world history at Eastern Illinois University. His publications include The History of South Africa, a translation of P. J. van der Merwe's The Migrant Farmer in the History of the Cape Colony, 1657-1842, and more than a hundred articles, book chapters, and reviews. He is a former treasurer and Executive Council member of the World History Association. Jerry Davila (Ph.D., Brown University) is Jorge Paulo Lemann professor of Brazilian History at the University of Illinois. He is the author of Dictatorship in South America; Hotel Tropico: Brazil and the Challenge of African Decolonization, winner of the Latin Studies Association Brazil Section Book prize; and of Diploma of Whiteness: Race and Social Policy in Brazil, 1917-1945. He has served as president of the Conference on Latin American History Clare Haru Crowston (Ph.D., Cornell University) teaches at the University of Illinois, where she is currently associate professor of history. She is the author of Fabricating Women: The Seamstresses of Old Regime France, 1675-1791, which won the Berkshire and Hagley Prizes. She edited two special issues of the Journal of Women's History, has published numerous journal articles and reviews, and is a past president of the Society for French Historical Studies. John P. McKay (Ph.D., University of California, Berkeley) is professor emeritus at the University of Illinois. He has written or edited numerous works, including the Herbert Baxter Adams Prize-winning book Pioneers for Profit: Foreign Entrepreneurship and Russian Industrialization, 1885-1913.