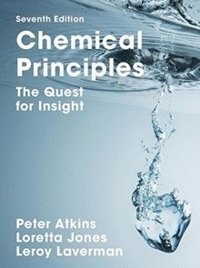 The Quest for Insight

av Peter Atkins, Loretta Jones, Leroy Laverman
(3 röster)  |  Läs 1 recension
Inbunden Engelska, 2016-03-01
799
Köp
Spara som favorit
Finns även som
Visa alla 2 format & utgåvor
The main theme throughout this textbook is to challenge students to think and question, while providing a solid foundation in the principles of chemistry. This seventh edition is written for students of all levels who would benefit from learning how to think, pose questions and tackle problems. Unlike other texts, this title begins with a detailed picture of the atom then builds toward chemistry's frontier, continually demonstrating how to solve problems, think about nature and matter, and visualize chemical concepts as working chemists do. The authors aim to present readers and instructors with maximum flexibility and digestible chunks, as the content is presented as a series of 85 short topics. Allowing instructors to tailor their course and take a path through the text that matches learning objectives.
Visa hela texten