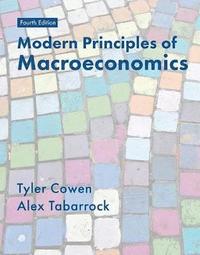 av Tyler Cowen, Alex Tabarrok
Häftad Engelska, 2018-02-14
689
Köp
Spara som favorit
Kan levereras innan julafton!
Finns även som
Visa alla 2 format & utgåvor
International Edition Engaging and provocative writing, as well as a knack for revealing the 'invisible hand' of economics at work has made Tyler Cowen and Alex Tabarrok's text a singularly distinctive and effective text for principles modules. Modern Principles of Macroeconomics places an emphasis throughout on the power of incentives which underscores how economics helps us understand why we do what we do (in other words, the decisions we make in the face of incentives in the real world). The new edition retains its progressive approach to economic modelling and applications which allows for a more realistic interpretation of today's world events. Mirroring the authors' successful blog, the text eschews boxed features to focus on the writing behind compelling examples, key concepts, and applications. Modern Principles of Macroeconomics is available with SaplingPlus, our integrated online learning system which combines powerful multimedia resources with an integrated e-Book, robust homework, and a wealth of interactives, creating an extraordinary new learning resource for students. Resources include: Over 150 videos for pre-class engagement, lecture videos which explore concepts in-depth (useful for distance learning courses, self-study, or in flipped-classroom settings) and 'Office hours' videos which show worked problems and address student misconceptions Find out more about SaplingPlus at www.macmillanihe.com/sapling.
Visa hela texten

Tyler Cowen is Holbert C. Harris Professor of Economics at George Mason University and Director of the Mercatus Center and the James M. Buchanan Center for Political Economy. He is published widely in economics journals, including the American Economic Review and Journal of Political Economy. With Alex Tabarrok he co-writes the Marginal Revolution blog, often ranked as the #1 economics blog. He is also the author of Discover Your Inner Economist (Dutton, 2007) and numerous other books on economics. He writes regularly for the popular press on economics, including for The New York Times, The Washington Post, Forbes, and The Wilson Quarterly. University web page: http://economics.gmu.edu/faculty/tcowen.html WATCH: Tyler Cowen at the Economic Bloggers Forum. Alex Tabarrok is Bartley J. Madden Chair in Economics at the Mercatus Center at George Mason University and director of research for The Independent Institute. Tabarrok is co-author with Tyler Cowen of the popular economics blog, Marginal Revolution. His recent research looks at bounty hunters, judicial incentives and elections, crime control, patent reform, methods to increase the supply of human organs for transplant, and the regulation of pharmaceuticals. He is the editor of the books, Entrepreneurial Economics: Bright Ideas from the Dismal Science; The Voluntary City: Choice, Community, and Civil Society; and Changing the Guard: Private Prisons and The Control of Crime. His papers have appeared in the Journal of Law and Economics, Public Choice, Economic Inquiry, Journal of Health Economics, Journal of Theoretical Politics, The American Law and Economics Review, Kyklos and many other journals. His popular articles have appeared in The New York Times, The Wall Street Journal, and many other magazines and newspapers.