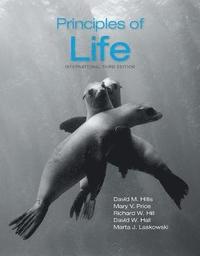 av David M Hillis, Mary V Price, Richard W Hill, David W Hall, Marta Laskowski
Häftad Engelska, 2019-03-25
714
Köp
Spara som favorit
Building on the modern biology classroom elements of the second edition, Principles of Life, Third Edition, integrates several new features designed to involve students actively in mastering concepts and becoming skilful at solving biological problems, as well as developing the skills needed of modern biologists. A key strategy is to integrate the six "core competencies" laid out in the AAAS Vision and Change report: 1) the ability to apply the process of science2) the ability to use quantitative reasoning3) the ability to use modeling and simulation4) the ability to tap into the interdisciplinary nature of science5) the ability to communicate and collaborate with other disciplines6) the ability to understand relationships between science and society
Visa hela texten

David M. Hillis is the Alfred W. Roark Centennial Professor in Integrative Biology at the University of Texas at Austin, where he also has directed the Center for Computational Biology and Bioinformatics and the School of Biological Sciences. Dr. Hillis has taught courses in introductory biology, genetics, evolution, systematics, and biodiversity. He has been elected to the National Academy of Sciences and the American Academy of Arts and Sciences, awarded a John D. and Catherine T. MacArthur Fellowship, and has served as President of the Society for the Study of Evolution and of the Society of Systematic Biologists. David E. Sadava is the Pritzker Family Foundation Professor of Biology, Emeritus, at the Keck Science Center of Claremont McKenna, Pitzer, and Scripps, three of The Claremont Colleges. In addition, he is Adjunct Professor of Cancer Cell Biology at the City of Hope Medical Center. Twice winner of the Huntoon Award for superior teaching, Dr. Sadava has taught courses on introductory biology, biotechnology, biochemistry, cell biology, molecular biology, plant biology, and cancer biology. Richard W. Hill is Professor in the Department of Zoology at Michigan State University and a frequent Guest Investigator at Woods Hole Oceanographic Institution. He received his Ph.D. in Zoology from the University of Michigan. Mary V. Price is Professor of Biology, Emerita, at the University of California, Riverside and Adjunct Professor in the School of Natural Resources and the Environment at the University of Arizona. In "retirement," she continues to teach and study, having learned the joy and art of scientific discovery as an undergraduate student at Vassar College and doctoral student at the University of Arizona.