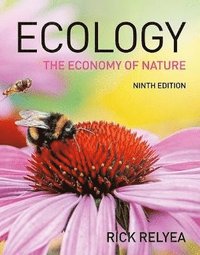 Ecology: The Economy of Nature

av Robert Ricklefs, Rick Relyea
Häftad Engelska, 2021-03-22
Studentlitteratur
681
Köp
Spara som favorit
Finns även som
Visa alla 1 format & utgåvor
Available for the first time with Macmillan's new online learning tool, Achieve, Ecology: The Economy of Nature takes students through all of the key concepts of an ecology course. It challenges them along the way with questions that encourage critical thinking, whether about chapter concepts, quantitative tools, or figures. Achieve for Ecology: The Economy of Nature connects the interactive features and real-world examples in the book to rich digital resources that foster further understanding and application of ecology. Assets in Achieve support learning before, during, and after class for students, while providing instructors with class performance analytics in an easy-to-use interface.
Visa hela texten

RICK RELYEA is the Director of the Darrin Fresh Water Institute at Rensselaer Polytechnic Institute. He also serves as Director of the Jefferson Project at Lake George, a groundbreaking partnership between Rensselaer, IBM, and the FUND for Lake George. For the Jefferson Project, Rick leads a team of scientists, engineers, computer scientists, and artists who are using highly advanced science and technology to understand, predict, and enable resilient ecosystems.Together, the team has built the "Smartest Lake in the World" at Lake George (NY), using an intelligent sensor network, cutting-edge experiments, and advanced computer modeling. The research is currently expanding to other lakes in the region as The Jefferson Project builds the future of freshwater protection. From 1999 to 2014, Rick was at the University of Pittsburgh. In 2005, he was named the Chancellor's Distinguished Researcher and in 2014 he received the Tina and David Bellet Award for Teaching Excellence. From 2007 to 2014, he also served as the director of the university's field station, the Pymatuning Laboratory of Ecology, where he oversaw a diverse set of ecological field courses and facilitated researchers from around the world. Rick has taught thousands of undergraduate students in introductory ecology, behavioral ecology, and evolution and nearly 200 undergraduate students have worked in his research group. He has published more than 170 peer-reviewed journal articles in Ecology, Ecology Letters, American Naturalist, Environmental Pollution, PNAS, and other leading ecological journals. His research is recognized throughout the world and spans a wide range of ecological and evolutionary topics, including animal behavior, sexual selection, ecotoxicology, disease ecology, community ecology, ecosystem ecology, and landscape ecology. Currently, his research focuses on aquatic habitats and the diverse species that live in these ecosystems. Rick is co-author on the best-selling Environmental Science for the AP Course, Third Edition.