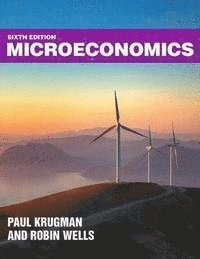 av Paul Krugman, Robin Wells
(1 röst)
Häftad Engelska, 2021-02-23
Studentlitteratur
825
Köp
Spara som favorit
Kan levereras innan julafton!
Finns även som
Visa alla 1 format & utgåvor
When it comes to explaining fundamental economic principles by drawing on current economic issues and events, there is no one more effective than Nobel laureate and New York Times columnist Paul Krugman and co-author, Robin Wells. In this best-selling introductory textbook, Krugman and Wells' signature storytelling style and uncanny eye for revealing examples will help students understand how economic concepts play out in our world. The new edition has been revised and enhanced throughout, including incisive new looks at long-run growth and at market power, and extensive coverage of the economic impacts and policy responses to the coronavirus pandemic. Microeconomics is supported by Achieve, which includes: Animated pre-lecture tutorials and bridge questions will help students to understand core economic topics before going to class Access to an eBook for easy reading and searching LearningCurve adaptive quizzing offers practice questions to check understanding and provide feedback Step-by-Step graphs and Work It Out activities allow students to work step-by-step through scenarios so that they can see economic principles in action
Visa hela texten

Paul Krugman, recipient of the 2008 Nobel Memorial Prize in Economic Sciences, received his BA from Yale and his PhD from MIT. Before Princeton, he taught at Yale, Stanford, and MIT. He also spent a year on the staff of the Council of Economic Advisers in 1982-1983. His research has included trailblazing work on international trade, economic geography, and currency crises. In 1991, Krugman received the American Economic association's John Bates Clark medal. In addition to his teaching and academic research, Krugman writes extensively for nontechnical audiences. He is a regular op-ed columnist for the New York Times and has authored best-selling trade books, several of which have become modern classics. Robin Wells was a lecturer and researcher in Economics at Princeton University, where she has taught undergraduate courses. She received her BA from the University of Chicago and her PhD from the University of California, Berkeley; she then did her postdoctoral work at MIT. She has taught at the University of Michigan, the University of Southampton (United Kingdom), Stanford, and MIT.