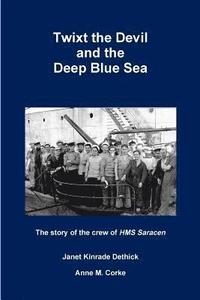 Twixt the Devil and the Deep Blue Sea

av Janet Kinrade Dethick, Anne M Corke
Häftad Engelska, 2015-08-01
169
Köp
Spara som favorit
During her distinguished career, submarine HMS Saracen was responsible for sinking thousands of tons of Axis shipping. But in August 1943 her luck ran out when she was mortally wounded by depth charges from two Italian corvettes, the last Allied submarine to be sunk by the Italians. Forced to surface, she was scuttled by her crew who were taken prisoner. But HMS Saracen's story is more than the story of a submarine. It is the story of her crew and their experiences both before and after her loss. From the cat and mouse games of war at sea to their harrowing escape from their stricken ship, from being sent to Dachau to finding themselves on a POW train bombed by the Americans, from being shot by the Germans to being assisted by the Rome Escape Line, from being sheltered by Italian families to joining the partisans, their stories of escape, of flight, of capture, are as varied as the men themselves. But their shared goal was to return home safely to their families and sadly some never did.
Visa hela texten