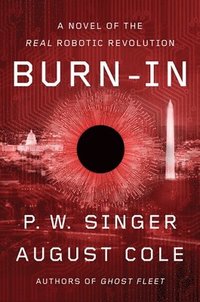 Burn-In: A Novel of the Real Robotic Revolution

av P W Singer
Inbunden Engelska, 2020-06-02
279
Köp
Spara som favorit
Skickas inom 5-8 vardagar.
Fri frakt inom Sverige för privatpersoner.
Finns även som
Visa alla 1 format & utgåvor
America is on the brink of a revolution. AI and robotics have realised science fiction's dreams, but have also taken millions of jobs and left many citizens fearful that the future is leaving them behind. After narrowly averting a bombing at Washington's Union Station, FBI Special Agent Lara Keegan receives a new assignment: to field test the first police robot. In the wake of a series of shocking catastrophes, the two find themselves investigating a conspiracy whose mastermind is using cutting-edge tech to rip the nation apart. To stop this new breed of terrorist, Keegan's only hope is to forge a new kind of partnership. With every tech, trend, and scene drawn from the real world, Burn-In blends a techno thriller's excitement with nonfiction's insight to illuminate the darkest corners of our chilling tomorrow.
Visa hela texten

"Burn-In is a fantastic, compelling, and authoritative look into the future--a future that is equal parts amazing and terrifying. With Burn-In, Peter Singer and August Cole establish themselves both as masters of the techno-thriller and as scientifically-grounded futurists. Woven into their riveting, page-turning tale of a brilliant FBI agent's future hunt for a diabolically clever, tech-savvy criminal are important lessons about the extremely difficult issues that lie ahead surrounding the use of AI, robotics, augmented reality, and ubiquitous surveillance. It is a terrific read!" --General David Petraeus (U.S. Army, Ret.), former Commander of the Surge in Iraq, U.S. Central Command, and Coalition Forces in Afghanistan and former Director of the CIA "Whether it's a Jack Reacher novel or John Le Carrespy drama, my litmus test of how good a book is, is the time to read. I started Burn-In Saturday of Memorial Day Weekend and finished it Monday...If you, like me, enjoy fast paced, well researched, tech adventure stories, you are going to devour Burn-In."--Forbes "Sci-fi remains one of the best ways to envision how new technology will shape the future, and "Burn-In" is the rare work of science fiction that has the solid grounding of nonfiction. The central conspiracy plot is Tom Clancy-level -- in the best possible way -- but what sets "Burn-In" apart is the deep research the authors used to build their near-future world, all of which is meticulously detailed in 26 pages of endnotes. The bottom line: If you want to understand how AI, robots and cyber terrorism could remake our world -- and you don't want to wade through hundreds of pages of scientific papers --"Burn-In" is the summer read for you."--Axios "Burn-In will do more for defense experts' understanding of this brave new world with literature than a thousand non-fiction assessments would have."--War On The Rocks "For think-tankers and military and civilian officials, "Burn-In" offers a buffet of challenging questions and troubling future quandaries; for those who seek a good story, it has it all: robot sidekicks, bearded military veterans gone rogue, and a technological showdown of biblical proportions set in the nation's capital."--Military.com "The book, like the other noteworthy novel the two collaborated on, Ghost Fleet, meets its purpose skillfully. It is both lively, entertaining, and well-written as well as thought-provoking....[It] should be essential reading for anyone who looks out at the landscape today and sees clouds looming over the horizon."--CIMSEC "Timely and compelling as it is entertaining, Burn-In raises important issues and will provoke the necessary conversations that must happen about humanity and the future we want as we embrace technology at an ever-accelerating pace."--The Cipher Brief "A riveting technothriller that is not only highly entertaining but meticulously researched and presents a near-future state that is closer than you think."--InMilitary "It's a story of human machine teaming, but like a buddy cop movie...It's a glimpse into the future."--Defense One "That fascinating place where things have a real chance of becoming real...This book is very much like a nerd's dream. It's fantastic. I love the concept." -State Secrets "It's a very interesting book...It's a future shock novel like Greg Bear's 'Slant, ' where things are happening faster and faster. But it's also a military thriller. I compare it to Tom Clancy."--Podside Picnic "This book is so many things. It's a great detective story. It's fantastic thriller. It's a great human drama." --OODA Loop "A visionary new form of storytelling--a rollercoaster ride of science fiction blended with science fact." --Damon Lindelof, writer/creator of Lost, Star Trek Into Darkness, and Watc

Bloggat om Burn-In: A Novel of the Real Robotic Revo...

P. W. SINGER is the New York Times best-selling author of multiple award-winning fiction and nonfiction books on twenty-first-century security. www.pwsinger.com. AUGUST COLE is a writer specializing in narratives about the future of conflict. www.augustcole.com.