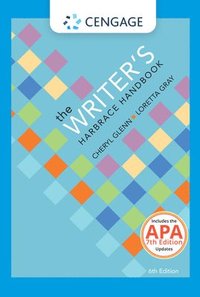 av Cheryl Glenn
Inbunden Engelska, 2016-09-09
1069
Köp
Spara som favorit
Specialorder (osäker tillgång). Skickas inom 11-20 vardagar.
Fri frakt inom Sverige för privatpersoner.
Become a more effective reader, researcher, and writer with THE WRITER'S HARBRACE HANDBOOK. This handbook will give you the tools to understand how best to approach any opportunity for writing. Assignments, sample papers, and clear guidelines for writing conventions in a variety of disciplines will help you situate yourself as an effective writer in classes across the curriculum. Visual aids help reinforce and illustrate key concepts throughout the book, making it easy to grasp essential ideas and hone your writing skills quickly. The thorough coverage of various research methods, including traditional library research, online research, and multiple concepts of field research, will help you throughout your college career. This edition has been updated to reflect guidelines from the 2016 MLA HANDBOOK, Eighth Edition.
Visa hela texten

Distinguished Professor of English and Women's Studies and Director of the Program in Writing and Rhetoric at The Pennsylvania State University, Cheryl Glenn is widely known for her scholarship, leadership, and teaching. Besides authoring THE HARBRACE GUIDE TO WRITING and co-authoring THE HARBRACE HANDBOOKS, she is author of the prize-winning RHETORIC RETOLD: REGENDERING THE TRADITION FROM ANTIQUITY THROUGH THE RENAISSANCE; UNSPOKEN: A RHETORIC OF SILENCE; RHETORICAL EDUCATION IN AMERICA; LANDMARK ESSSAYS ON RHETORIC AND FEMINISM; RHETORIC AND WRITING IN THE NEW CENTURY; and several other titles. Dr. Glenn's rhetorical scholarship has earned her many awards, including three National Endowment for the Humanities awards, the Conference on College Composition and Communication's Richard Braddock Award, Rhetoric Review's Outstanding Essay Award, Best Book/Honorable Mention from the Society for the Study of Early Modern Women, and Rhetorician of the Year. She has served as Chair of the Conference on College Composition and Communication (CCCC), the largest organization of writing and rhetoric teachers in the world; as President of the Coalition of Women Scholars in the History of Rhetoric and Composition; on the CCCC and NCTE Executive Committees; as Chair of the Modern Language Association (MLA) Division on the History and Theory of Rhetoric and Composition; and as a member of the MLA Delegate Assembly. Dr. Glenn's teaching and scholarship have earned her six university teaching and mentoring awards. Professor of English at Central Washington University, Loretta Gray has three degrees related to her interest in composition and applied linguistics: Master of Arts in Teaching English as a Second Language (School for International Training), Master of Arts in Spanish (Middlebury College), and Doctor of Philosophy in Applied Linguistics (Boston University). She has experience teaching English to non-native speakers in Mexico, Spain, and the United States. In addition, she taught Spanish at Clemson University and applied linguistics at the School for International Training. Dr. Gray has been teaching composition and applied linguistics courses at Central Washington University in Ellensburg, Washington, since 1992. She also is co-author of the textbook RHETORICAL GRAMMAR.