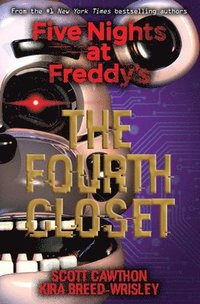 av Kira Breed-Wrisley, Scott Cawthon
(2 röster)
Häftad Engelska, 2018-07-05
117
Köp
Spara som favorit
The pulse-pounding conclusion to the bestselling Five Nights At Freddy's trilogy. What really happened to Charlie? It's the question that John can't seem to shake, along with the nightmares of Charlie's seeming death and miraculous reappearance. John just wants to forget the whole terrifying saga of Freddy Fazbear's Pizza, but the past isn't so easily buried. Almost twelve years after the horrific murders at Freddy's, there's a new animatronic pizzeria opening in Hurricane, along with new rash of kidnappings that feel all too familiar. Bound together by their childhood loss, John reluctantly teams up with Jessica, Marla, and Carlton to solve the case and find the missing children. Along the way, they'll unravel the twisted mystery of what really happened to Charlie, and the haunting legacy of her father's creations. Original stories based on the hit computer game of the same name The perfect gift for all FNAF fans Check out the full-colour fact books which acompany the novels OTHER TITLES IN THE SERIES Five Nights at Freddys: The Silver Eyes Five Nights at Freddys: The Twisted Ones Five Nights at Freddys: The Freddy Files Five Nights at Freddys: Survival Logbook
Visa hela texten

Scott Cawthon is the author of the bestselling video game series Five Nights at Freddy's, and while he is a game designer by trade, he is first and foremost a storyteller at heart. He is a graduate of The Art Institute of Houston and lives in Texas with his wife and four sons. Kira Breed-Wrisley has been writing stories since she could first pick up a pen and has no intention of stopping. She is the author of seven plays for Central New York teen theater company The Media Unit, and has developed several books with Kevin Anderson & Associates. She is a graduate of Cornell University, and lives in Brooklyn, New York.