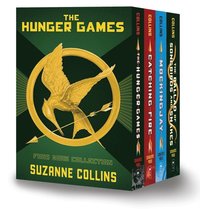 The Hunger Games, Catching Fire, Mockingjay, The Ballad of Songbirds and Snakes

av Suzanne Collins
Inbunden Engelska, 2020-10-01
787
Köp
Spara som favorit
Kan levereras innan julafton!
This beautiful hardcover box set includes all three books in Suzanne Collins's internationally bestselling Hunger Games trilogy together with The Ballad of Songbirds and Snakes. In the ruins of a place once known as North America lies the nation of Panem, a shining Capitol surrounded by twelve outlying districts. The Capitol keeps the districts in line by forcing them all to send one boy and one girl between the ages of twelve and eighteen to participate in the annual Hunger Games, a fight to the death on live TV... And the odds are against all who play. With all four of Suzanne Collins's Hunger Games novels in one box set, you can step into the world of Panem with the 10th annual Hunger Games, and continue all the way to the electrifying conclusion.
Visa hela texten

Praise for The Hunger Games: I couldn't stop reading. -- Stephen King, Entertainment Weekly The Hunger Games is amazing. -- Stephenie Meyer Brilliantly plotted and perfectly paced. -- John Green, New York Times Book Review Praise for Catching Fire: Whereas Katniss kills with finesse, Collins writes with raw power. -- Time Magazine Collins expertly blends fantasy, romance and political intrigue. -- People Magazine Praise for Mockingjay: Fans will be happy to hear that Mockingjay is every bit as complex and imaginative as Hunger Games and Catching Fire. -- Entertainment Weekly Suspenseful... Collins' fans, grown-ups included, will race to the end. -- USA Today At its best the trilogy channels the political passion of 1984, the memorable violence of A Clockwork Orange, the imaginative ambience of The Chronicles of Narnia and the detailed inventiveness of Harry Potter. -- New York Times Book Review Unfolding in Collins' engaging, intelligent prose and assembled into chapters that end with didn't-see-that-coming cliffhangers, this finale is every bit the pressure cooker of its forebears. [Mockingjay] is nearly as shocking, and certainly every bit as original and thought-provoking, as The Hunger Games. Wow. -- Los Angeles Times * This concluding volume in Collins's Hunger Games trilogy accomplishes a rare feat, the last installment being the best yet, a beautifully orchestrated and intelligent novel that succeeds on every level. -- Publishers Weekly, starred review

Suzanne Collins is the author of the bestselling Underland Chronicles series, which started with Gregor the Overlander. Her groundbreaking young adult novels, The Hunger Games, Catching Fire, and Mockingjay, were New York Times bestsellers, received wide praise, and were the basis for four popular films. She returned to the world of Panem with The Ballad of Songbirds and Snakes. Year of the Jungle, her picture book based on the year her father was deployed in Vietnam, was published in 2013 to great critical acclaim. To date, her books have been published in fifty-three languages around the world.