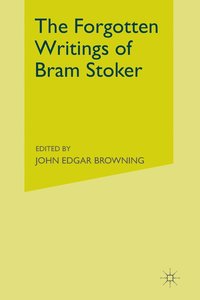 The Forgotten Writings of Bram Stoker

"In The Forgotten Writings of Bram Stoker, John Edgar Browning gathers Stoker's early poetry, some of his journalism, several interviews, a number of trivial short stories, the catalogue of his library, and many other odds and ends. Yet what surprises most in these pages is the humor, sometimes sentimental, sometimes macabre, sometimes utterly fanciful." - The Washington Post "For more than a hundred years the name Count Dracula has struck a chill into the hearts of readers. The original Bram Stoker novel has spawned countless imitation stories and a rich tradition of vampire films that still thrill audiences today. Now, in the centenary year of the author's death, a discovery of lost work by him has shed fresh light on a great horror masterpiece . . . The writings reveal much about the style and background Stoker would re-use in his classic vampire story." - The Guardian "Palgrave Macmillan has produced a handsome volume, and the detective work of the book's editor, John Edgar Browning, is to be commended. " -The Times Literary Supplement "The Forgotten Writings of Bram Stoker has got just what you'd want from a Stoker collection." - blastr.com (SyFy Channel) "The Forgotten Writings of Bram Stoker illuminates and elucidates Stoker as a person. The assembled short stories overall exhibit his predilection for affairs of the heart and pat happy endings. There is much ado about his theatre associations. All are extremely well presented and scholarly without being stuffy. Still, what is the bottom line? Editor John Edgar Browning provides Stoker enthusiasts with a book that will pique their zeal and round out their collection." - Diabolique "An undeniable treasure trove." - Fangoria "An important contribution to Stoker studies." - Rue Morgue "An important volume in Stoker studies...skilled literary detective work went into finding everything in The Forgotten Writings." - The Virginia Quarterly "The Forgotten Writings of Bram Stoker is a treasure trove for Stoker fans, offering up previously lost and unknown works. Among them, his short story 'When the Sky Rains Gold' - which brings about the revelation that the horror master also wrote romances." - Publisher's Weekly "A curious collection of miscellaneous writing by the author of Dracula. Browning digs into obscure archives for lost works by Stoker (1847 1912), who maintained a rich writing life while serving a 30-year tenure as business manager for the actor Sir Henry Irving, based at the Lyceum Theatre in London . . . The tales included here display some of Stoker's weirdly meandering plots and mischievous humor . . . [and] a fascinating catalog of the items for sale at the 1913 auction of Stoker's property, especially his library, full of books by his friend Walt Whitman." - Kirkus Reviews "The Forgotten Writings of Bram Stoker is impressive right from the first page . . . if you have any interest in Bram Stoker at all, this is a book for you." - Horror World "This collection also permits academic study of the intertextual development of the broader Stoker oeuvre, especially elements later synthesised in his Dracula tale. As such, the collection has a broad appeal, and serves an important function in the on-going compilation of the Stoker bibliography." - The Historical Novels Review "The Forgotten Writings of Bram Stoker is a book that belongs on the bookshelves of everyone who is interested in Dracula, Stoker, or the long nineteenth century." - Carol A. Senf, author of Bram Stoker (Gothic Authors: Critical Revisions) and Professor and Associate Chair of the School of Literature, Communication, and Culture at the Georgia Institute of Technology, USA "Another fascinating volume from the rising star in Stoker research. With each new book and each new discovery, John Edgar Browning coaxes the elusive author o

John Edgar Browning is Arthur A. Schomburg Fellow in the Department of Transnational Studies and an adjunct faculty member in the Department of English at SUNY-Buffalo. He has co-/written eight books, including Draculas, Vampires, and Other Undead Forms: Essays on Gender, Race, and Culture; Dracula in Visual Media: Film, Television, Comic Book and Electronic Game Appearances, 1921-2010; The Vampire, His Kith and Kin: A Critical Edition; and Bram Stoker's Dracula: The Critical Feast, An Annotated Reference of Reviews and Reactions, 1897-1920. His work on horror and the fantastic has appeared in numerous anthologies and journals, including Film History, Horror Studies, Studies in the Fantastic, and Dead Reckonings: A Review Magazine for the Horror Field. Elizabeth Miller is Professor Emerita at The Memorial University of Newfoundland. She is recognized internationally for her expertise on Bram Stoker's 1897 novel, Dracula and is the president of the Canadian chapter of Transylvanian Society of Dracula and the editor of the Journal of Dracula Studies. Her publications include Reflections on Dracula; Dracula: The Shade and the Shadow; Dracula: Sense & Nonsense, A Dracula Handbook; Bram Stoker's Notes for Dracula: A Facsimile Edition; and Bram Stoker's Dracula: A Documentary Journey into Vampire Country and the Dracula Phenomenon. Dacre Stoker is the great grand-nephew of Bram Stoker and the best-selling co-author of Dracula the Un-Dead, the official Stoker family-sanctioned sequel to Dracula. Dacre is also the co-editor (with Miller) of The Lost Journal of Bram Stoker: The Dublin Years.