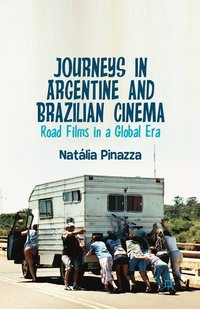 Journeys in Argentine and Brazilian Cinema

Road Films in a Global Era

"Journeys in Argentine and Brazilian Cinema takes a nuanced look at the various levels of cultural exchange and reformulation present in the last few decades of Argentine and Brazilian cinema within a context of neoliberal globalization and international, trans-Atlantic co-productions. Pinazza does an excellent job of tying the production details and politico-economic context of filmmaking together with the thematic details and social issues addressed in the diegesis of each film analyzed. Readers will enjoy being introduced to a number of interesting films dealing with contemporary issues at the local level in dialogue with the global and the author's discussion of the films will encourage further exploration on the part of the readers thus continuing on their own 'journey.'" - Jack A. Draper III, Associate Professor, Portuguese, University of Missouri, USA "What is the impact of globalization in South American film? In which ways have co-productions influenced contemporary Argentine and Brazilian cinema? What are the Argentine and Brazilian filmic narratives that depict transnational movements? And in which ways do contemporary migrants to and from Brazil and Argentina perceive their changing identities? These are the questions that Pinazza tackles in Journeys in Argentine and Brazilian Cinema as she provides insightful and compelling film analysis focusing on diasporic characters as well as the varied representations of the nation during times of globalization." - Carolina Rocha, Department of Foreign Languages and Literature, Southern Illinois University, USA

Natalia Pinazza is Associate Lecturer in the Department of Iberian and Latin American Studies at Birkbeck, University of London, UK.

Introduction 1. National and Transnational Film Studies: The Argentine and Brazilian Case 2. Home: National Crisis, Fragmented Family and Death 3. Europe as Destination and Point of Departure 4. Bordercrossing in the Southern Cone 5. The Return to the Sertao and Patagonia 6. Conclusion