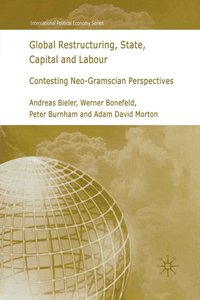 'The book is a stimulus towards clarifying a radical critique of the world we know and all will profit by reading the concrete illustrative cases included in the exposition of the different theoretical standpoints.' - Robert Cox, Professor Emeritus of Political Science, York University, Toronto, Canada 'Eschewing orthodoxies, this work in critical theory offers fresh insights into capitalist development and globalization. Its iconoclastic approach is a rare find, a wake-up call to rethinking International Relations and world order.' - James H. Mittelman, Professor of International Relations, American University, USA '[P]rovides a thoughtful overview of the debates on the left about a number of issues, from Latin American state development to the political economy of the European Union.' - Political Studies Review

ANDREAS BIELER is a Senior Lecturer in the School of Politics, University of Nottingham, UK. His book publications include Globalization and Enlargement of the European Union and The Struggle for a Social Europe: Trade Unions and EMU in Times of Global Restructuring. WERNER BONEFELD teaches at the Department of Politics, University of York, UK and is an Associate Fellow at the Centre for Comparative Labour Studies, University of Warwick, UK. His most recent book publications include Human Dignity: Social Autonomy and the Critique of Capitalism (with Kosmas Psychopedis) and Revolutionary Writing. PETER BURNHAM teaches in the Department of Politics and International Studies at the University of Warwick, UK. His publications include The Political Economy of Postwar Reconstruction and Remaking the Postwar World Economy . ADAM DAVID MORTON is a Senior Lecturer in the School of Politics and International Relations at the University of Nottingham, UK. He is author of Unravelling Gramsci: Hegemony and Passive Revolution in the Global Political Economy and co-editor (with Andreas Bieler) of Images of Gramsci: Connections and Contentions in Political Theory and International Relations. He has also published in various journals, including Bulletin of Latin American Research, Third World Quarterly, Millennium: Journal of International Studies, Review of International Political Economy, and New Political Economy.