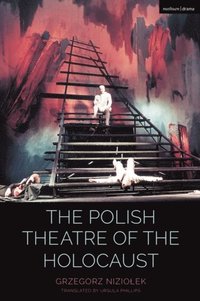 Polish Theatre of the Holocaust (e-bok)

av Niziolek Grzegorz Niziolek, Cochrane Claire Cochrane, Mcconachie Bruce Mcconachie
E-bok (EPUB - DRM), Engelska, 2019-05-30
319
Ladda ned
Spara som favorit
Laddas ned direkt
Läs i vår app för iPhone, iPad och Android
Finns även som
Visa alla 3 format & utgåvor
Grzegorz Niziolek's The Polish Theatre of the Holocaust is a pioneering analysis of the impact and legacy of the Holocaust on Polish theatre and society from 1945 to the present. It reveals the role of theatre as a crucial medium of collective memory and collective forgetting of the trauma of the Holocaust carried out by the Nazis on Polish soil. The period gave rise to two of the most radical and influential theatrical ideas during work on productions that addressed the subject of the Holocaust Grotowski's Poor Theatre and Kantor's Theatre of Death - but the author examines a deeper impact in the role that theatre played in the processes of collective disavowal to being a witness to others' suffering. In the first part, the author examines six decades of Polish theatre shaped by the perspective of the Holocaust in which its presence is variously visible or displaced. Particular attention is paid to the various types of distortion and the effect of 'wrong seeing' enacted in the theatre, as well as the traces of affective reception: shock, heightened empathy, indifference. In part two, Niziolek examines a range of theatrical events, including productions by Leon Schiller, Jerzy Grotowski, Tadeusz Kantor, Andrzej Wajda, Krzysztof Warlikowski and Ondrej Spi k. He considers how these productions confronted the experience of bearing witness and were profoundly shaped by the legacy of the Holocaust.The Polish Theatre of the Holocaust reveals how -- by testifying about society's experience of the Holocaust -- theatre has been the setting for fundamental processes taking place within Polish culture as it confronts suppressed traumatic wartime experiences and a collective identity shaped by the past.
Visa hela texten