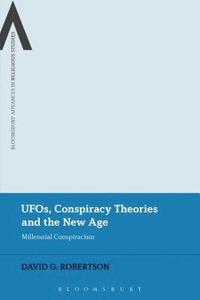 av David G Robertson
Häftad Engelska, 2017-08-24
449
Köp
Spara som favorit
Skickas inom 10-15 vardagar.
Fri frakt inom Sverige för privatpersoner.
Finns även som
Visa alla 3 format & utgåvor
How-and why- were UFOs so prevalent in both conspiracy theories and the New Age milieu in the post-Cold War period? In this ground-breaking book, David G. Robertson argues that UFOs symbolized an uncertainty about the boundaries between scientific knowledge and other ways of validating knowledge, and thus became part of a shared vocabulary. Through historical and ethnographic case studies of three prominent figures-novelist and abductee Whitley Strieber; environmentalist and reptilian proponent David Icke; and David Wilcock, alleged reincarnation of Edgar Cayce-the investigation reveals that millennial conspiracism offers an explanation as to why the prophesied New Age failed to arrive-it was prevented from arriving by malevolent, hidden others. Yet millennial conspiracism constructs a counter-elite, a gnostic third party defined by their special knowledge. An overview of the development of UFO subcultures from the perspective of religious studies, UFOs, Conspiracy Theories and the New Age is an innovative application of discourse analysis to the study of present day alternative religion.
Visa hela texten

This fascinating book is an important contribution and a delight to read. * Religious Studies Review * David G. Robertson's book offers a welcome new perspective on the significance of the UFO in the Anglophone world and the different meanings that these symbolically resonant objects have assumed in the post-Cold War period. With its concise prose and engaging style, Robertson's book offers not only a compelling analysis of contemporary millennialism, but an equally compelling model of critical rigor. * Nova Religio * Robertson does an excellent job unpacking and narrating the complicated story of the emergence of the "2012 phenomenon," as well as demonstrating how [David] Wilcock has engaged the rhetoric of science in order to marshal epistemic capital... I hope this book is read by more than just specialists in these fields, since Robertson is fundamentally correct: we should take millennial conspiracism seriously as a form of religious discourse. -- Benjamin E. Zeller * Reading Religion * David Robertson's UFOs, Conspiracy Theories and the New Age is both engaging and highly accessible ... In addition to expanding on the existing literature in a novel new way, this book also holds substantial theoretical value, not only for the study of contemporary fringe movements, but also for the field of Religious Studies as a whole. * British Association for the Study of Religions Bulletin * An academic but easily readable book, with a good description of the development of the UFO myth and subsequent analysis of the worldview as expressed by the author and abduction-"experts" Whitley Strieber, David Icke (yes, it is he who believes that the members of the British royal family are disguised reptiles!) and David Wilcock, an alleged Edgar Cayce reincarnation. This rather colourful threesome might well inspire more to study the many aspects of the UFO myth. * UFO-Mail newsletter [Bloomsbury translation] * David Robertson's UFOs, Conspiracy Theories and the New Age: Millennial Conspiracism is a highly original and compulsively readable study of conspiracy beliefs, popular millennialism, and the emergence of an alternative history of the post-war world generated by a 'counter-elite'. Robertson details the epistemic strategies of these champions of rejected knowledge, in which a Gnostic flavoured theodicy is united with transformative millennialism, promising a new world once individuals have awakened and the malevolent forces of Government, Big Pharma, and the 'Establishment' are defeated. The teachings of the three figures examined in detail, UFOlogist Whitley Streiber, prophet of the 'reptilian thesis' David Icke, and 2012 millennialist and alleged reincarnation of Edgar Cayce, David Wilcock, exemplify what Robertson terms a 'theodicy of the dispossessed', in which the disenfranchisement of the counter-elite is explained by the existence of a powerful malevolent enemy. While there is little in Robertson's study that could be traditionally understood as 'religion' or 'religious studies', the book is ultimately highly relevant to this discipline, and will act as an encouragement to scholars to more deeply interrogate notions such as theodicy, eschatology, prophecy, and belief, all phenomena that are equally relevant to traditional religions and ostensibly non-religious UFOlogical and millennial groups. -- Carole M. Cusack is Professor of Religious Studies Studies in Religion at The University of Sydney, Australia David Robertson's splendid book significantly illuminates our understanding of contemporary millennialism and conspiracism. * Michael Barkun, Professor Emeritus of Political Science, Syracuse University, USA * Long confined to the lunatic fringe, narratives about UFO conspiracies gained a wider audience through the New Age movement. Robertson' timely book shows their surprisingly large influence on the contemporary subculture of alternative spirituality. It also makes for enjoyable reading. * Massimo Introvigne

David G. Robertson is Co-Editor-In-Chief of the Religious Studies Project and a committee member of the British Association for the Study of Religion. He teaches at the University of Edinburgh and has published widely on new religions, millennialism, conspiracy theories and critical theory. He recently guest-edited a special issue of Nova Religio and is the co-editor of After World Religions: Reconstructing the Introductory Course in Religious Studies (2016).

List of Illustrations Acknowledgements Prologue: 'And the Truth Shall Set You Free' 1. Introduction: Aquarian Conspiracies 2. Approaching Millennial Conspiracism 3. 'Trust No-One': UFOs, Conspiracism and Popular Millennialism during the Cold War, 1947-87 4. Occulted Histories: Whitley Strieber and the Abductee Narrative 5. 'Problem-Reaction-Solution': David Icke and the Reptilian Thesis 6. 'The Science of Oneness': David Wilcock and '2012' Millennialism 7. The Counter-Elite/A Theodicy of the Dispossessed Notes Bibliography