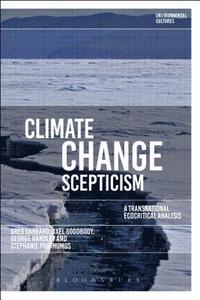 Scientifically, climate is mostly understood. Today, it is the socio-political issue "climate" which public interest is focused on. The medium through which the issue is activated in public discourse and policymaking is language, laden with cultural constructions and beliefs. That is what this much needed book is about: the metamorphoses of climate when entering different public arenas. * Hans von Storch, Climate scientist and Professor at the Meteorological Institute of the University of Hamburg, Germany *

Greg Garrard is Associate Professor of Sustainability at the University of British Columbia, Canada. He is the author of the bestselling book Ecocriticism (2nd edition, 2011) and editor of The Oxford Handbook of Ecocriticism (2014). Axel Goodbody is Emeritus Professor of German and European Culture at the University of Bath, UK. His previous publications include, as co-editor, Ecocritical Theory: New European Approaches (2011). George B. Handley is Professor of Interdisciplinary Humanities at Brigham Young University, USA. His previous publications include New World Poetics: Nature and the Academic Imagination of Whitman, Neruda, and Walcott (2007) and, as co-editor, Postcolonial Ecologies: Literatures of the Environment (2011). Stephanie Posthumus is Associate Professor in the Department of Languages, Literatures, and Cultures at McGill University, Canada. She is the author of French Ecocritique: Reading Contemporary French Theory and Fiction Ecologically (2017).