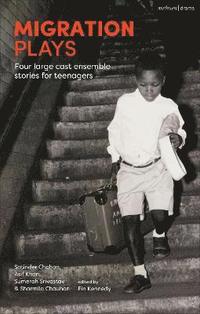 av Satinder Chohan, Asif Khan, Sumerah Srivastav, Sharmila Chauhan, Fin Kennedy
Häftad Engelska, 2019-08-08
219
Köp
Spara som favorit
Skickas inom 10-15 vardagar.
Fri frakt inom Sverige för privatpersoner.
Finns även som
Visa alla 2 format & utgåvor
Featuring four new plays written and devised in collaboration with groups of secondary school children, this collection examines immigration to and emigration from the UK. A theatre-in-education project coordinated by Tamasha theatre company and The Migration Museum, children worked on exercises designed to develop their understanding of, and feelings about, migration. Their reactions were then incorporated into a piece of theatre by a professional playwright that the students then performed. This collection brings together these plays along with the unique exercises that inspired them. The plays include: Nothing to Declare by Sharmila Chauhan follows three precious keepsakes and the stories attached to them as their owners are stopped at a hostile border. Potato Moon by Satinder Chohan focuses on the potatoes buried in a share allotment. They become people's memories in a magical realist Southall and so when they start to go missing, schoolgirl Mira set out to find out why. Wilkommen by Asif Khan follows 11 year Ammar on the most dangerous journey of his life, from war-torn country, across sea and land, to take up the offer of a new life in Europe. Jigsaw by Sumerah Srivstav tells the story of how three angels, horrified by mankind's cruelty, prepare to wipe them out... until they find an unlikely friend who changes their mind. This is an invaluable collection that gives both teachers the resources to address the sometimes tricky issues surrounding migration and students the opportunity to create and in doing so counteract and humanize the narratives hear in the media and society as a whole.
Visa hela texten

Fin Kennedy is an award-winning UK playwright. He writes for adults and teenagers and his plays are regularly produced in the UK and around the world. He is also an acclaimed teacher of playwriting and community arts project manager, with a particular focus on young people's projects in London's East End. His second play How To Disappear Completely & Never Be Found won the 38th Arts Council John Whiting Playwrighting Award. It was subsequently commissioned by Sam West for Sheffield Crucible and produced to critical acclaim in 2007. It has since been produced in London, Los Angeles, Chicago, Washington, Melbourne, Auckland, and Portland, Oregon.