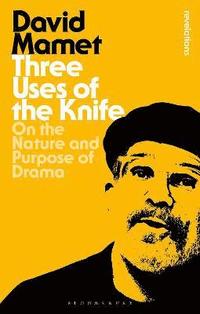 Three Uses Of The Knife

On the Nature and Purpose of Drama

av David Mamet
Häftad Engelska, 2020-10-01
179
Köp
Spara som favorit
Skickas inom 5-8 vardagar.
Fri frakt inom Sverige för privatpersoner.
Finns även som
Visa alla 5 format & utgåvor
Now published in the Bloomsbury Revelations series, this is a classic work on the power and importance of drama by renowned American playwright, screenwriter and essayist David Mamet. In this short but arresting series of essays, David Mamet explains the necessity, purpose and demands of drama. A celebration of the ties that bind art to life, Three Uses of the Knife is an enthralling read for anyone who has sat anxiously waiting for the lights to go up on Act 1. In three tightly woven essays of characteristic force and resonance, Mamet speaks about the connection of art to life, language to power, imagination to survival, public spectacle to private script. Self-assured and filled with autobiographical touches Three Uses of the Knife is a call to art and arms, a manifesto that reminds us of the singular power of the theatre to keep us sane, whole and human.
Visa hela texten

David Mamet is one of America's great dramatists and screenwriters. His plays include Oleanna; Glengarry Glen Ross, for which he won a Pulitzer Prize and a New York Drama Critics Circle Award; Speed-the-Plow; and Sexual Perversity in Chicago, among others. His films include, as screenwriter, The Postman Always Rings Twice, The Verdict, The Untouchables, The Edge and Wag the Dog, and as a writer/director, House of Games, Homicide, Things Change , The Spanish Prisoner and State and Main. He is also the author of children's books; books of essays; novels and a book on acting, True and False.

ONE: The Wind-Chill Factor The Perfect Ball Game Anti-Stratfordianism The Problem Play Letters of Transit TWO: Second Act Problems Violence Self-Censorship THREE: Three Uses of the Knife The Eleven-O'Clock Song The End of the Play Index