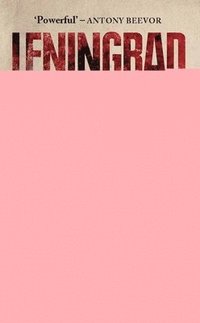 Inside a City Under Siege

av Alexander Werth
Häftad Engelska, 2020-06-25
276
Köp
Spara som favorit
Finns även som
Visa alla 3 format & utgåvor
The Siege of Leningrad is the most powerful testimony to the immeasurable cruelty and horror of World War II. From 1941-1945, the Eastern Front was the site of some of the bloodiest atrocities of the war and the city of Leningrad, now St. Petersburg, proved to be a decisive point in the conflict. German policy was resolutely determined to redraw the map of Europe, annihilate the Soviet Union and give large areas of territory to Finland. Through Hitler's ambition to completely eradicate the city and its entire population, it was decided that the most efficient method of invasion was to encircle and bombard the city into submission. After 872 days of aggression, one and a half million people lost their lives, mostly from starvation. As the sole British correspondent to have been in Leningrad during the blockade, Alexander Werth's eyewitness account presents a harrowing perspective on the savagery and destruction wrought by the Nazis against the civilian population of the city. His writing evokes compelling images of terror - the oil bombing of children's hospitals, mass starvation and cannibalism - with rich and sophisticated commentary on the internal politics of Soviet party chiefs, soldiers and civilian resistance fighters. Both an authoritative historical document and a journalistic re-telling of the overwhelming sadness, grief and futility of 20th century warfare, this is an invaluable look at one of the greatest losses of human life in recorded history.
Visa hela texten

Alexander Werth (1901-1969) was a Russian-born British writer and war journalist. He was the BBC's correspondent in the Soviet Union from 1941-1945, and the Moscow correspondent for the Guardian from 1946-1949. He was one of the first outsiders to be allowed into Stalingrad after the battle, and wrote several books describing his experiences.

Preface by Nicholas Werth Moscow to Leningrad First Contact St. Petersburg - Leningrad The Observation Tower Sightseeing Kamenny Island Leningrad Airmen A Factory in the Famine Sunday Evening in Leningrad Children in the Famine and Now The Bristles of the Hedgehog Endurance : The Kirov Works At the Writer's Union All-day Shelling The Mayor of Leningrad Speaks The Last Day Leningrad's Liberation : The Second Visit