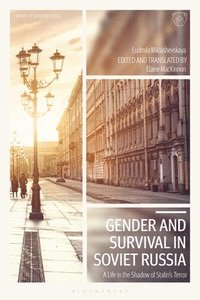 Gender and Survival in Soviet Russia

A Life in the Shadow of Stalin's Terror

av Ludmila Miklashevskaya, Elaine MacKinnon
Häftad Engelska, 2021-07-29
579
Köp
Spara som favorit
Finns även som
Visa alla 2 format & utgåvor
This first-hand witness account - originally written by Ludmila Miklashevskaya in 1976 and here translated into English by historian Elaine MacKinnon for the first time - tells the important story of one woman's persecution under Stalin. From Miklashevskaya's middle-class Jewish childhood in Odessa, to her life in exile as the wife of 'an enemy of the people' and false imprisonment in a labour camp for the attempted murder of NKVD leader Nikolai Yezhov, to her later attempts at rehabilitation, her memoir is a fascinating tapestry of Soviet artistic, intellectual, and political life set against the tumultuous backdrop of revolutions, wars, and repressive regimes. Accompanied by a translator's introduction and detailed historical explanatory notes, Gender and Survival in Soviet Russia sheds new light on the relationship between power, gender, and society in 20th-century Russia. This book is thus a vital primary resource for scholars of modern Russian history and gender studies, offering a compelling and personal route into understanding how the machinations of Soviet Russia destroyed everyday life, tearing families apart and leaving scars that never healed.
Visa hela texten

[Ludmila Miklashevskaya's] descriptions of cultural and artistic circles in the early decades of Soviet power are absorbing and skillfully drawn. MacKinnon's translation is lyrical, her annotations are useful, and her wide-ranging historical introduction makes Miklashevskaya's significant account accessible even to those with no background in Soviet history. * CHOICE * Free of malice and full of acceptance and self-awareness, Ludmila Miklashevskaya's poignant and gripping memoir offers stirring testimony to how one remarkable woman, well-connected in the literary and cultural worlds, survived the vicissitudes, especially the dark side, of the Soviet experiment. Elaine MacKinnon's marvelously fluent translation of the Russian original captures the straight-thinking tone of this important contribution to Soviet, gender, Gulag, and Jewish studies. * Donald J. Raleigh, Jay Richard Judson Distinguished Professor of History, University of North Carolina Chapel Hill, USA * This is a sweeping memoir that takes the reader from Jewish life in pre-revolutionary Odessa to the rehabilitation of political prisoners in Khrushchev's Thaw. A fascinating and occasionally harrowing chronicle of life during the first four decades of Soviet rule, this is sure to appeal to both the general and the academic reader. * Claire McCallum, Lecturer in 20th Century Russian History, University of Exeter, UK * [Ludmila Miklashevskaya's] memoir makes a very welcome contribution to the growing range of narratives that detail women's everyday lives in late imperial Russia and the Soviet Union as well as to the more specific testimonies of women's experiences of Stalinist repression. * Ab Imperio Quarterly *

Elaine MacKinnon is Professor of Russian and Soviet History at the University of West Georgia, USA. She is the translator of Mass Uprising in the Soviet Union (2002, written by Vladimir Kozlov). Ludmila Miklashevskaya (1899 - 1976) was a Russian writer, editor and typist.

Translator's Preface Introduction 1. An Odessa Childhood 2. Growing Up During War and Revolution 3. A New Life in Petrograd 4. Gathering Clouds: Marital Storms and Emigration 5. Homecoming and a New Start in Moscow 6. Love and Marriage in Leningrad 7. Motherhood in a Time of Terror 8. Intro the Vortex of Suffering: Ten Years in the Gulag 9. Release, Exile and Rehabilitation: The Bittersweet Taste of 'Freedom' Further Readings Index