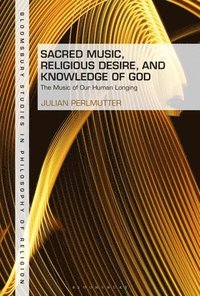 The Music of Our Human Longing

av Dr Julian Perlmutter
Häftad Engelska, 2021-08-26
561
Köp
Spara som favorit
Kan tyvärr inte längre levereras innan julafton.
Finns även som
Visa alla 2 format & utgåvor
Many people find sacred choral music profound and deeply evocative, even in societies that seem to be turning away from religious belief. In this book, Julian Perlmutter examines how, in light of its wide appeal, sacred music can have religious significance for people regardless of their religious convictions. By differentiating between doctrinal belief and the desire for God, Perlmutter explores a longing for the spiritual that is compatible with both belief and 'interested non-belief'. He describes how sacred music can elicit this kind of longing, thereby helping the listener to grow in religious openness. The work of Thomas Merton is also analyzed in order to show that musically-elicited desire for God can be incorporated into the Christian practice of contemplative prayer, aimed ultimately at a union of love with God. By exploring connections between desire, knowledge and religious practice, this engaging account illustrates how sacred music can have a transformative effect on one's wider spiritual life. Of particular interest to philosophers and theologians, the book makes a novel contribution to several topics including religious epistemology, the philosophy of emotion and aesthetics.
Visa hela texten

Julian Perlmutter has produced a fascinating and carefully argued examination of the relationship between sacred music and the way in which an individual can experience a longing for knowledge of God arising in the heart ... [This book] will fascinate anyone who would be engaged by a rigorous, academically robust, but always pastorally motivated exploration of why it is that the choral tradition does what it does. * Theology * Sacred Music, Religious Desire and Knowledge of God provides a refreshing and insightful discussion of how culture, aesthetics, and desire can motivate and enhance efforts to seek knowledge of the Christian God. * Religious Studies * Julian Perlmutter makes a significant contribution to our understanding of the epistemic role sacred music can play in the life of the "interested non-believer". In so doing, he breaks new ground in the intersection of aesthetics and the philosophy of religion. * David Efird, formerly Senior Lecturer of Philosophy, University of York, UK *

Julian Perlmutter has taught philosophy and theology at the University of Cambridge, UK, and has held a research fellowship in the philosophy of religion at King's College London, UK.