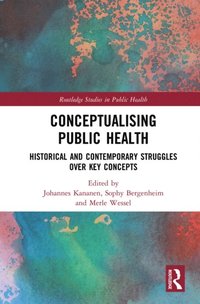 av Johannes Kananen, Sophy Bergenheim, Merle Wessel
E-bok (PDF - DRM), Engelska, 2018-02-19
649
Ladda ned
Spara som favorit
Laddas ned direkt
Läs i vår app för iPhone, iPad och Android
Finns även som
Visa alla 2 format & utgåvor
In Germanic and Nordic languages, the term for 'public health' literally translates to 'people's health', for example Volksgesundheit in German, folkhalsa in Swedish and kansanterveys in Finnish. Covering a period stretching from the late nineteenth century to the present day, this book discusses how understandings and meanings of public health have developed in their political and social context, identifying ruptures and redefinitions in its conceptualisation. It analyses the multifaceted and interactive rhetorical play through which key concepts have been used as political tools, on the one hand, and shaped the understanding and operating environment of public health, on the other.Focusing on the blurred boundaries between the social and the medico-scientific realms, from social hygiene to population policy, Conceptualising Public Health explores the sometimes contradictory and paradoxical normative aims associated with the promotion of public health. Providing examples from Northern Europe and the Nordic countries, whilst situating them in a larger European and international context, it addresses questions such as:How have public health concepts been used in government and associated administrative practices from the early twentieth century up to the present? How has health citizenship been constructed over time? How has the collective entity of 'the people' been associated with and reflected in public health concepts? Drawn from a range of disciplinary backgrounds, the authors collected here each examine a particular way of understanding public health and assess how key actors or phenomena have challenged, altered or confirmed past and present meanings of the concept. Conceptualising Public Health is of interest to students and scholars of health and welfare state development from diverse backgrounds, including public health, sociology of health and illness, and social policy as well as medical, conceptual and intellectual history.
Visa hela texten