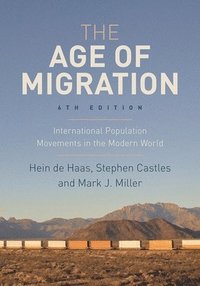 The Age of Migration

av Hein De Haas, Stephen Castles, Mark J Miller
Häftad Engelska, 2019-12-06
408
Köp
Spara som favorit
Finns även som
Visa alla 3 format & utgåvor
Long established as the leading textbook on migration and used by students and scholars alike all over the world, this fully revised and updated sixth edition continues to offer an authoritative and cutting-edge account of migration flows, why they occur, and their consequences for both origin and destination societies. International migration is one of the most emotive issues of our times, reforging societies around the world and shaping debates on security, national identity and sovereignty in profound ways. The expert authors of this book provide a truly global and interdisciplinary introduction to this perennially important topic, with chapters covering all of the world's regions and spanning the nineteenth century to the present day. Exploring the significance of migration in relation to recent events and emerging trends, from the policies of the European Union to the Great Recession, this text helps to shed light on the often large gap between the rhetoric and realities of migration. For students of migration studies in disciplines as wide ranging as Politics, Sociology, Geography, Area Studies, Anthropology and History this is an indispensable guide, whether already familiar with the subject matter or approaching the topic for the first time. The Age of Migration is published by Macmillan Education. In the United States and its dependencies, Canada, Mexico and the Philippines, it is distributed under licence by Guildford Press. https://www.guilford.com/books/The-Age-of-Migration/Castles-Haas-Miller/9781462513116
Visa hela texten