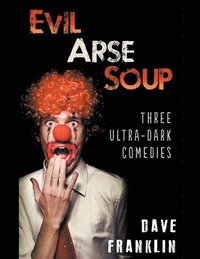 This trio of politically incorrect comedies, which bleakly focus on male inadequacy and misogyny, will introduce you to a bunch of chronic misfits kicking around Wales, Australia and South Korea.

Just make sure you don't leave this little encyclopaedia of dysfunction on your maiden aunt's chair...

Marty's living in a Welsh town he hates, doing a job he's lost interest in and so bored he can't even be bothered with sex.
But a new life beckons in Australia. It's also a chance to get away from his stupid mates, the loveable loser John and the ultra-macho Wasp Boy.
Maybe he'll even meet an exquisite girl like his Doctor Who heroine, Sarah Jane Smith, and live happily ever after...

Looking for Sarah Jane Smith - For anyone who suspects life's a bit rubbish.

Part road trip and part celebration of idiotic male friendship, Looking for Sarah Jane Smith is sure to strike a chord with those who appreciate The Inbetweeners, Peep Show and Bill Hicks.

Perth.
It's thousands of miles from anywhere, it's got a rubbish Bell Tower and not enough of the laidback locals are being eaten by sharks.

Manic Streets of Perth - Where a snake-wielding robber is just the start of your troubles.

Gentler and warmer than Dave Franklin's other novels, Manic Streets is an easy to read comedy.

Every year thousands of people travel to faraway lands to teach English as a foreign language. The fools.
One such expat is Paul Taylor, a heartbroken Aussie looking for a fresh start in a South Korean classroom. The lack of training isn't much of a help, but it's the baffling natives and unhinged flatmates that really start to convince him he's crash-landed in another galaxy...

Packed with over the top characters, English Toss is a demented sitcom of a novel that revels in the extremes of expat dislocation.

Dave Franklin is the author of eight novels and four collections of short stories, none of which should be read to small children at bedtime. His caustic, profanity-laced prose should be approached with caution.