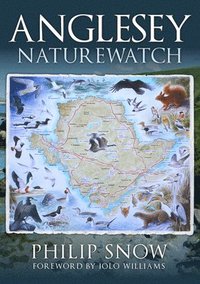 av Philip Snow
Häftad Engelska, 2021-06-15
199
Köp
Spara som favorit
Finns även som
Visa alla 1 format & utgåvor
The island of Anglesey has a wonderful variety of natural history and landscape. In this beautifully illustrated guide to the flora and fauna of Anglesey, wildlife painter and author Philip Snow guides the reader through the glorious landscape of Anglesey and its natural history, from cliffs, estuaries, dunes and beaches, its lakes, rivers, marshes and fens, to pastures, woods and heaths. Each of Anglesey's nature reserves and Sites of Special Scientific Interest are covered, with walks and maps, accompanied by the author's beautiful illustrations of the wildlife, plants and landscape of the island. This attractive nature guide to Anglesey will appeal to all those interested in the wildlife and natural history of the island, whether they live on Anglesey or are visiting.
Visa hela texten

Philip Snow is a wildlife painter and writer who lives on Anglesey. His artwork appears in many publications & galleries on several continents, including in Royal, National & many Private Collections, including HRH Prince Charles, Welsh Assembly, the American Airforce Museum & National Falconry Archives. Philip has illustrated, or contributed illustrations or covers, to over 80 books including 8 written & illustrated by himself. His paintings are also found in many magazines, prints, cards, calendars, reserve guides, signs, decorated maps etc., for such as Collins, RSPB, BBC Wildlife magazine, Artist & Illustrator, Cheshire Life, American & European magazines, BBC TV Countyryfile, and Bill Oddies 'Gt Bird Race' game. Iolo Williams is a Welsh naturalist and broadcaster, best known for his nature programmes. The presenter of over 20 TV series in two languages, he is also a presenter on BBC network's Nature Watch programmes. He has a degree in Ecology and has worked in farming, timber and for the RSPB in the field and as a regional co-ordinator.