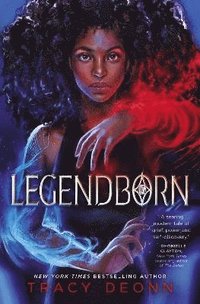 TikTok made me buy it! The New York Times bestseller

av Tracy Deonn
(3 röster)
Häftad Engelska, 2020-09-15
126
Köp
Spara som favorit
Finns även som
Visa alla 2 format & utgåvor
SOME LEGACIES ARE MEANT TO BE BROKEN. "I love the feeling of a magical world existing just beneath the surface of our own and this story gave me everything I wanted: incredible characters, ancient lore and secret societies - all grounded in our very real, very flawed world . . ." -Leigh Bardugo, author of Shadow and Bone An explosive fantasy debut that is taking TikTok by storm. Perfect for fans of Cassandra Clare, Leigh Bardugo, Sarah J. Maas and Cinderella is Dead! Filled with mystery and Southern Black Girl Magic, Tracy Deonn's New York Times bestselling Legendborn offers the dark allure of City of Bones with a modern-day twist on a classic legend . . . After her mother dies in an accident, sixteen-year-old Bree Matthews wants to escape. A residential programme for bright high-schoolers seems like the perfect opportunity - until she witnesses a magical attack her very first night on campus . . . A flying demon feeding on human energies. A secret society of so-called "Legendborn" that hunt the creatures down. A mysterious mage who calls himself a "Merlin" and who attempts - and fails - to wipe Bree's memory of everything she saw. The mage's failure unlocks Bree's own unique magic and a buried memory about her mother. Now Bree will do whatever it takes to discover the truth, even infiltrate the Legendborn. But when the Legendborn reveal themselves as the descendants of King Arthur's knights and foretell a magical war, Bree must decide how far she'll go for the truth. Should she use her magic to take the society down - or join the fight? Winner of the Coretta Scott King - John Steptoe for New Talent Author Award, and a New York Times bestseller!
Visa hela texten

A King Arthur reimagining that adds seats to the roundtable, inviting new readers to find themselves within its lore, Tracy Deonn's Legendborn braids southern folk traditions and Black Girl Magic into a searing modern tale of grief, power and self-discovery. -- Dhonielle Clayton Legendborn is an enthralling, standout modern fantasy about history and power, and Deonn is an author to watch. -- Kiersten White Legendborn is intoxicating, electrifying, and resonates with a deep understanding and vulnerable adoration of what it is to be a Black girl searching for the magic of herself. Tracy Deonn captivates you from page one with her perfect pacing, exhilarating plotting, and a command of storytelling that cannot be ignored. This book will hold everything you are hostage until, page by page, you discover how it has actually set you free. -- L. L. McKinney Perfect for fans of Cassandra Clare and Kiersten White, Tracy Deonn's unique reimagining of Arthurian legend is full of magic and heart. A brilliant debut! -- Ashley Poston It takes a special talent to breathe fresh life into Arthurian legend, but Deonn does it with ease in this fast-paced tale * i News? * This is the fantasy novel for all once and future fans of suspense-filled storytelling * Kirkus Reviews * A promising series debut perfect for fans of Cassandra Clare's City of Bones and Maggie Stiefvater's The Raven Boys. This book underscores the movement for more inclusive versions of traditional Western narratives, and will be a favourite of contemporary fantasy readers. Highly recommended * School Library Journal STARRED REVIEW * explores themes of ancestral pain, grief and love, balancing them with stimulating world-building and multiple thrilling plot twists * Publishers Weekly * An intoxicating mix of Southern Black traditions, the King Arthur mythos and teenage melodrama. * Tor.com * Legendborn is a thrilling and tense fantasy that weaves Arthurian adventure with southern Black culture into a story that had me shouting. It will hook readers from the very beginning and leave them breathless until the final, mind-blowing revelation -- Kwame Mbalia Legendborn is a remarkable debut that should firmly place Tracy Deonn on every fantasy and contemporary YA reader's radar. Deft and insightful blending of Arthurian legend and Southern Black American history make for an engrossing tale of mystery, romance, and finding your place in the world? - an absolute must-read! -- Alyssa Cole [R]ich and explosive debut. * School Library Journal, starred review * Legendborn establishes Deonn as an important new voice in YA. * Bookpage, starred review * Deonn's contemporary fantasy is a cultural gem that will connect readers with their roots in the most gut-punching, unapologetic of ways. * Booklist, starred review * Legendborn is about to be your new favorite book. * Nerdist * I love the feeling of a magical world existing just beneath the surface of our own and this story gave me everything I wanted: incredible characters, ancient lore and secret societies - all grounded in our very real, very flawed world . . . -- Leigh Bardugo

Tracy Deonn is a writer and second-generation fangirl. She grew up in central North Carolina, where she devoured fantasy books and Southern food in equal measure. After earning her master's degree in communication and performance studies from the University of North Carolina at Chapel Hill, Tracy worked in live theater, video game production, and K-12 education. When she's not writing, Tracy speaks on panels at science fiction and fantasy conventions, reads fanfic, arranges puppy playdates, and keeps an eye out for ginger-flavoured everything. She can be found on Twitter at @TracyDeonn and at TracyDeonn.com.