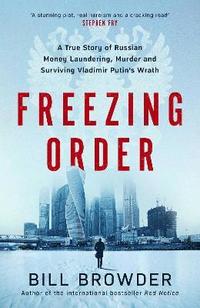 av Bill Browder
Inbunden Engelska, 2022-04-12
259
Köp
Spara som favorit
Finns även som
Visa alla 2 format & utgåvor
THE SUNDAY TIMES NO 2 BESTSELLER ** THE NEW YORK TIMES NO 1 BESTSELLER 'More explosive, compulsive and gasp-inducingly, spine-tinglingly, mouth-dryingly, heart-poundingly thrilling than any fiction I have read for years, but it is all true' Stephen Fry 'Mind-blowing...Browder's battle for justice is at times terrifying, at times deeply touching' Catherine Belton 'A jaw-dropping expose by Putin's anti-corruption nemesis' Daily Telegraph Following his explosive international bestseller Red Notice, Bill Browder returns with another gripping thriller chronicling how he became Vladimir Putin's number one enemy by exposing Putin's campaign to steal and launder hundreds of billions of dollars and kill anyone who stands in his way. When Bill Browder's young Russian lawyer, Sergei Magnitsky, was beaten to death in a Moscow jail, Browder made it his life's mission to go after his killers and make sure they faced justice. The first step of that mission was to uncover who was behind the $230 million tax refund scheme that Magnitsky was killed over. As Browder and his team tracked the money as it flowed out of Russia through the Baltics and Cyprus and on to Western Europe and the Americas, they were shocked to discovered that Vladimir Putin himself was a beneficiary of the crime. As law enforcement agencies began freezing the money, Putin retaliated. He and his cronies set up honey traps, hired process servers to chase Browder through cities, murdered more of his Russian allies, and enlisted some of the top lawyers and politicians in America to bring him down. Putin will stop at nothing to protect his money. As Freezing Order reveals, it was Browder's campaign to expose Putin's corruption that prompted Russia's intervention in the 2016 US presidential election. At once a financial caper, an international adventure and a passionate plea for justice, Freezing Order is a timely and stirring morality tale about how one man can take on one of the most ruthless villains in the world.
Visa hela texten

'I was hooked from the first paragraph. More explosive, compulsive and gasp-inducingly, spine-tingingly, mouth-dryingly, heart-poundingly thrilling than any fiction I have read for years, Freezing Order has a stunning plot - international conspiracy, malign and hidden rings of power and corruption, a dark threat to any hope of world order - but with this stunning twist: it is all true... Browder - with incredible courage, resilience and grace, and always at great risk to his personal safety and freedom - continues to chase after Putin and his henchmen... This is real heroism, and what a cracking good read it makes for.' -- Stephen Fry 'Mind-blowing. Bill Browder takes us down the rabbit hole of Kremlin lawfare where down is up and wrong is right, and powerful Russian interests are trying to upend our legal and political systems. This personal account of Browder's battle for justice is at times terrifying, at times deeply touching - and leads inexorably to a vast money-laundering scheme the Kremlin will seemingly stop at nothing to cover up.' -- Catherine Belton '[Freezing Order] tells the story of Browder's quest to establish a global regime for sanctioning Russians involved in corruption and criminality. But it reads like an international spy thriller. If its subject matter weren't so grave, the book could be said to have all the elements of a high-octane drama. Murder. Conspiracy. Piles of dirty money. Sexual intrigue. Freezing Order shudders with the constant threat of assassination, abduction or sudden, extreme violence. It is a tense and gripping read. -- Jamie Susskind * The Times * 'Freezing Order is a gripping tale of assassinations, legal battles and billions in cash. It would be entertaining fiction, but as a true story it's a warning and a roadmap for fighting back against the waves of crime and corruption emanating from Putin's Russia and other dictatorships. Bill Browder has shown that one man with courage can make a difference, and that even the most powerful regimes have weak spots. It's an inspiring message we should all heed, and with urgency.' -- Garry Kasparov 'This tale is full of villains - not just the Russians...but also the politicians, lawyers and judges in the West who carry out the Kremlin's dirty work. Despite the complexity of the affair, Browder has made his story into a real page turner. Amid the horrors being reported every day from Ukraine, it also provides a highly readable insight into the true nature of the regime that is responsible for them..' -- Peter Conradi * Sunday Times * 'Browder's account of how he stood up to Putin in the face of danger, arrest warrants, and bullying is mandatory reading for anyone who wants to understand the tactics of modern autocracy.' -- Anne Applebaum '[A] zesty new book about the theft, extortion, intimidation, lies and murder that are the Russian state's daily levers of power...a breakneck financial thriller compelling breathless attention...splendidly readable... One of the most sobering aspects of Browder's rollicking, dangerous adventure [is] that late-period Putin has found it so easy to manipulate our western democracies from the inside.' -- Julian Evans * Daily Telegraph * 'Absolutely gripping. Bill Browder's new book on the Magnitsky affair follows the money all the way to the top of Russia's murderous kleptocracy. Freezing Order ought to be compulsory reading. Luckily it reads like a thriller.' -- Tom Stoppard 'It's an incredible story, told with pace and panache, that reads like a thriller. There's something deeply offending to our sense of justice about an innocent man framed by powerful forces...but what is most troubling here is how acquiescent the western establishment has been to Russian crimes and lies.' -- Andrew Anthony * Observer * 'Bill Browder's thrilling new book digs deeper into the kleptocratic world enabled and supported by the Russian state, for the benefit of the most powerful and well-connected crooks in Russia and beyond. This ex

Bill Browder, founder and CEO of Hermitage Capital Management, was the largest foreign investor in Russia until 2005. Since the murder of Sergei Magnitsky, Browder's advocacy has led to the passage of the Magnitsky Act in 34 countries. These laws have the power to sanction human rights abusers and kleptocrats all around the world. He holds a BA in economics from the University of Chicago and an MBA from Stanford Business School. He lives with his wife and children in London.