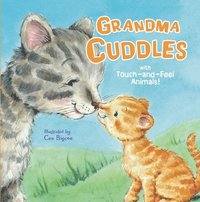 av Jodie Shepherd
Kartonnage Engelska, 2020-03-10
129
Köp
Spara som favorit
Skickas inom 5-8 vardagar.
Fri frakt inom Sverige över 159 kr för privatpersoner.
Bedtime routines are more fun with Grandma! In this sweet board book, different grandma and grandbaby animal pairs prepare for bed, from bath time to story time. Invite your little one to feel the crocodile's scales, for instance, as you read aloud, Grandma makes my bath time fun While I get nice and clean. We splash each other till at last, My scales are gleaming green! Me and Grandma love to cuddle, Splashy, splooshy, soapy cuddles! Then cuddle up for the night as you say "I love you" one more time. The cute rhymes, adorable art, and fun tactile elements make this book the perfect gift from a grandma to her little one, for a first-time grandma, or in celebration of Grandparents Day. Snuggle in! Even bedtime is better with Grandma.
Visa hela texten

Jodie Shepherd, who also writes under her real name, Leslie Kimmelman, is the award-winning author of many dozens of both fiction and nonfiction titles for children. She is also a children's book editor. Cee Biscoe has been illustrating picture books full time since early 2008. Her first picture book, Gruff the Grump, was one of the "Reads of the Year" in the Red House Children's Book Awards 2010. Since then she has illustrated several picture books and board books for a variety of publishers, including Grandma Kisses. The board book Sleepy Me was selected for inclusion in the 2012 Bookstart pack, and Messy Me was shortlisted for Lancashire County Council's Early Years Book Awards 2012. She completed an MA in children's book illustration at Cambridge School of Art in 2008.