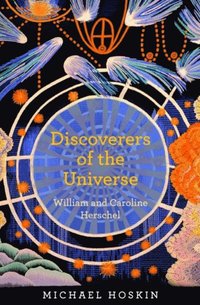 Discoverers of the Universe (e-bok)

av Michael Hoskin
E-bok (EPUB - DRM), Engelska, 2011-01-10
289
Ladda ned
Spara som favorit
Laddas ned direkt
Läs i vår app för iPhone, iPad och Android
Finns även som
Visa alla 1 format & utgåvor
Discoverers of the Universe tells the gripping story of William Herschel, the brilliant, fiercely ambitious, emotionally complex musician and composer who became court astronomer to Britain's King George III, and of William's sister, Caroline, who assisted him in his observations of the night sky and became an accomplished astronomer in her own right. Together, they transformed our view of the universe from the unchanging, mechanical creation of Newton's clockmaker god to the ever-evolving, incredibly dynamic cosmos that it truly is. William was in his forties when his amateur observations using a homemade telescope led to his discovery of Uranus, and an invitation to King George's court. He coined the term &quoteasteroid,&quote discovered infrared radiation, was the first to realize that our solar system is moving through space, discovered 2,500 nebulae that form the basis of the catalog astronomers use today, and was unrivalled as a telescope builder. Caroline shared William's passion for astronomy, recording his observations during night watches and organizing his papers for publication. She was the first salaried woman astronomer in history, a pioneer who herself discovered nine comets and became a role model for women in the sciences. Written by the world's premier expert on the Herschels, Discoverers of the Universe traces William and Caroline's many extraordinary contributions to astronomy, shedding new light on their productive but complicated relationship, and setting their scientific achievements in the context of their personal struggles, larger-than-life ambitions, bitter disappointments, and astonishing triumphs.
Visa hela texten