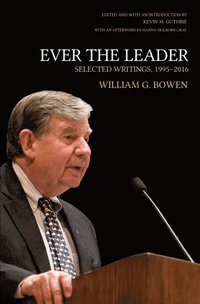 Ever the Leader (e-bok)

av William G Bowen, Kevin M Guthrie, Kevin M Guthrie, Hanna Holborn Gray
E-bok (EPUB - DRM), Engelska, 2017-10-31
299
Ladda ned
Spara som favorit
Laddas ned direkt
Läs i vår app för iPhone, iPad och Android
Finns även som
Visa alla 1 format & utgåvor
Ever the Leader gathers together selected speeches and writings from one of the great scholars and commentators of higher education. William G. Bowen's career at Princeton University-from economics professor to provost to a sixteen-year tenure as president-was marked by extraordinary accomplishments during times of great change, both at the university and in the country. But it was in Bowen's second act, as president of the Andrew W. Mellon Foundation and founding chairman of ITHAKA, that he took the lessons he learned as a highly productive leader of one of the nation's most esteemed universities and applied them to a broader set of problems in higher education. This volume of work from Bowen's later career captures this expansion of his thought and influence.Comprising remarks and articles on the subjects of university values, educational opportunity, college sports, technology, and colleagues and peers in higher education leadership, Ever the Leader is more than just a concise distillation of Bowen's research and thinking on some of the most urgent issues of the day-it is a portrait of leadership in action. The selected papers, talks, and articles exemplify Bowen's commitment and singular ability to communicate strong, persuasive arguments for change, and to motivate others to engage with the truly hard questions facing higher education leaders.Filled with formidable insights, Ever the Leader will be required reading for university presidents, policymakers, and all those who carry on the struggle for equity and excellence in higher education.
Visa hela texten