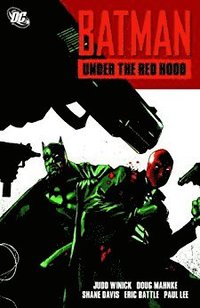 Under The Red Hood

Writer/artist Judd Winick has handled most every major character in the DC Universe including notable runs on Green Lantern, Green Arrow, The Outsiders, Justice League: Generation Lost and wrote the critically acclaimed animated feature Batman: Under the Hood, based on his run on Batman. Winick came to national attention when appearing on MTV's The Real World: San Francisco, his experienced inspired his memoir, the award-winning Pedro and Me: Friendship, Loss, and What I Learned. His most recent work includes Batwing and Catwoman. Born in 1963 in the Year of the Rabbit, Doug Mahnke embarked on a love affair with comics at the age of five, having received a pile of Spider-Man issues from a rugby-playing college student named Mike who lived in his basement. A consistent interest in the medium, coupled with some art skill, landed Doug a job drawing comics for Dark Horse at the age of 24 (the date is known precisely, as it occurred just two weeks before he wed his lovely bride). His first gig was illustrating a moody detective one-shot entitled Homicide, written by John Arcudi. The two went on to collaborate on Dark Horse's the Mask and their creator-owned series Major Bummer, originally published by DC. Since then Doug has worked on a wide variety of titles (including Superman: The Man of Steel, JLA, Batman, Team Zero, Seven Soldiers Frankenstein, Black Adam: The Dark Age and Stormwatch: P.H.D.) with such writers as Joe Kelly, Judd Winick, Chuck Dixon, Grant Morrison, Christos Gage and Ed Brubaker, just to name a few. He resides in the midwest with his wife and six kids, one dog, and a bunny named Suzie.