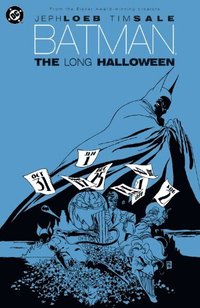 "THE LONG HALLOWEEN is more than a comic book. It's an epic tragedy." - Christopher Nolan (director The Dark Knight Rises)"THE LONG HALLOWEEN stretches beyond the normal boundaries of comics to create a legendary story of onem man's crusade against an insane world."--IGN"Featuring Sale's breathtaking art, which perfectly echoes the moodiness of the subject matter, The Long Halloween was an instant classic..."--Metro Toronto

Jeph Loeb is an Emmy award nominated and Eisner award winning writer/producer living in Los Angeles. In television, his many credits include "Smallville, Lost" and "Heroes" and in film, "Teen Wolf" and "Commando." In comics, he is best known for his work with the supremely talented artist and partner-in-crime TIM SALE on BATMAN: THE LONG HALLOWEEN, SUPERMAN FOR ALL SEASONS, CATWOMAN: WHEN IN ROME for DC as well as "Daredevil Yellow, Spider-Man Blue" and "Hulk Gray" for Marvel. Tim Sale is not only the artist for the numerous collaborations with Jeph Loeb listed above, but has also worked on DEATHBLOW, BATMAN: LEGENDS OF THE DARK KNIGHT, "Grendel," "Wolverine/Gambit: Victims," "Billi 99," "Amazon," and various other projects. He had the distinct honor of being the first creator chosen for the artist spotlight series SOLO.