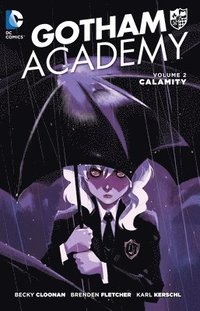 av Becky Cloonan
Häftad Engelska, 2016-03-22
149
Köp
Spara som favorit
Skickas inom 3-6 vardagar.
Fri frakt inom Sverige för privatpersoner.
Welcome to Gotham Academy! Gotham City's most prestigious prep school is a very weird place. It's got a spooky campus, oddball teachers, and rich benefactors always dropping by... like that weirdo Bruce Wayne. But nothing is as strange as the students! Are these Gotham's newest heroes... or villains? The future is here at Gotham Academy. GOTHAM ACADEDMY Vol. 2 digs deeper into the mysteries that surround the pretigious school and the characters that inhabit it. Collects GOTHAM ACADEMY #7-12.
Visa hela texten

"Gorgeous, grinning and full of promise, "Gotham Academy" is easily my favorite first issue of the fall."--CBR "Whether you're a longtime Bat fan or one new to the fold, Gotham Academy is a winner."--IGN "Cloonan and Fletcher tap straight into the mainline of freshness with this mixture of old school mystery adventure and morning cartoon."--NEWSARAMA "The creative team has knocked this one out of the park."--COMICVINE

Becky Cloonan is an American comic book artist and creator known for her manga-influenced artwork. Her first major comics work came when she teamed with writer Brian Wood to create Channel Zero: Jennie One. However, she is best-known for her second collaboration with Wood, DEMO, a 12-issue limited series that was named "Indie of the Year" by Wizard Magazine in 2004 and nominated for two Eisner Awards including Best Limited Series. In 2009 Cloonan and Wood expanded DEMO and re-published it through DC Comics' Vertigo imprint. Cloonan's first solo graphic novel, East Coast Rising Volume 1, earned her a third Eisner Award nomination for Best New Series. Her other work for DC Comics includes AMERICAN VIRGIN, co-created with writer Steven T. Seagle, and NORTHLANDERS for Vertigo as well as issues of BATMAN and SWAMP THING.