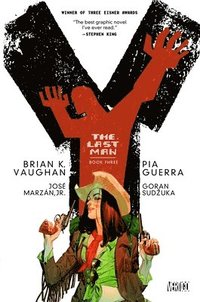 av Brian Vaughan
(1 röst)
Häftad Engelska, 2015-09-29
209
Köp
Spara som favorit
Skickas inom 5-8 vardagar.
Fri frakt inom Sverige för privatpersoner.
Y: The Last Man is the gripping saga of Yorick Brown, an unemployed and unmotivated slacker who discovers that he is the only male left in the world after a plague of unknown origin instantly kills every mammal with a Y chromosome. Accompanied by his mischievous monkey and the mysterious Agent 355, York embarks on a transcontinental journey to find his girlfriend and discover why he is the last man on Earth. In this third volume, Yorick's unbalanced sister Hero tracks him to San Francisco, only to find him seemingly succumbing to the male-killing plague after losing his still-unused engagement ring to agents of the Setauket Ring. Plus, Yorick, Agent 355, and Dr. Mann ship out across the Pacific to Japan in pursuit of Yorick's stolen monkey Ampersand, whose innards may hold the key to mankind's future. This volume collects Y: The Last Man #24-36.
Visa hela texten

Brian K. Vaughan is the Eisner Award-winning co-creator of the critically acclaimed comics series Y: The Last Man and Ex Machina. He also co-created the Vertigo graphic novel Pride of Baghdad and served as a writer and producer for the hit television series Lost. He is currently writing the bestselling Image Comics series Saga and the online comics series The Private Eye and is the showrunner and executive producer of the hit CBS television series Under the Dome, based on the bestselling novel by Stephen King.