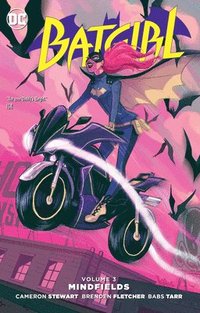 av Cameron Stewart, Brenden Fletcher, Babs Tarr
Häftad Engelska, 2016-08-30
159
Köp
Spara som favorit
Skickas inom 3-6 vardagar.
Fri frakt inom Sverige för privatpersoner.
In her civilian life, Barbara Gordon faces average, and not-so-average, troubles of a teenager in the "Brooklyn" of Gotham City, but as Batgirl she is tasked with battled the forces that attempt to bring down her friends and her city. When police corruption is taking over Burnside's law enforcement, Batgirl must find allies on both fronts. Collects BATGIRL #46-50.
Visa hela texten

"Not your Daddy's Batgirl."--IGN "The Batgirl title at DC has maybe never been better, under the creative team of Cameron Stewart, Brenden Fletcher and Babs Tarr."--Nerdist "Smart and chic."--Shelf Life, Entertainment Weekly "This reinvigoration of Batgirl manages to be big fun and actually tuned in to Millennial culture... Thoroughly enjoyable. Sure to please superhero fans of all ages." -Library Journal "A clean, animated visual style that emphasizes the fun side of superheroics."--AV Club

Cameron Stewart is the illustrator of BATMAN AND ROBIN, SEAGUY, SEVEN SOLDIERS: THE MANHATTAN GUARDIAN, THE OTHER SIDE, CATWOMAN and many more. He has been nominated for Shuster, Eagle, Harvey and Eisner Awards, and his original webseries Sin Titulo won the 2010 Eisner and Shuster Awards for Best Digital Comic. He is currently writing BATGIRL for DC Comics. Brenden Fletcher is a Canadian writer, best known for his work at DC Comics. He is currently co-writing the critically acclaimed bestelling series BATGIRL with Cameron Stewart, which has reinvigorated the franchise. Fletcher is also co-writing GOTHAM ACADEMY with Becky Cloonan, as well as BLACK CANARY.