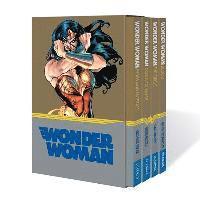 av Various
Häftad Engelska, 2016-11-15
458
Köp
Spara som favorit
Created in 1941, Wonder Woman has evolved into not just one of the most powerful heroes in DC Comics mythology, but also a popular culture and feminist icon the world over. Now celebrating over seven decades in the spotlight, the Amazonian Warrior has been the star of some of the most epic graphic novels ever made, by some of the biggest talents the comic industry has ever seen. In the WONDER WOMAN 75TH ANNIVERSARY BOX SET DC Comics packages graphic novels from four monumental creators--Gail Simone, Brian Azzarello, George Perez and Phil Jimenez--in a beautiful new this slipcase set perfect for collectors. Collects Wonder Woman Vol. 1: Gods and Mortals, Wonder Woman: Down to Earth, Wonder Woman: The Circle and Wonder Woman Vol. 1: Blood.
Visa hela texten

PRAISE FOR WONDER WOMAN VOL. 1: BLOOD: "Expect a lot more Wonder Woman fans after a few issues of this book." --USA Today "This is clear storytelling at its best....It's an intriguing concept and easy to grasp. The reader doesn't need to know that much about Wonder Woman because she is, well, Wonder Woman." --The New York Times "Azzarello's take on Wonder Woman is doing, er, wonders for the character. Showcasing her bad-ass warrior side as well as a sense of humor that's been sorely lacking in recent years, Azzarello is also rebuilding the mythology of Wonder Woman." --Maxim "Azzarello is crafting a highly-intelligent, and surprisingly gory, affair that's drenched in Greek mythology and godly mischief. And if that's not enough, artist Cliff Chiang simply kills it on every panel he touches. Put your presumptions aside because this is actually a Wonder Woman book worth reading." --Complex Magazine