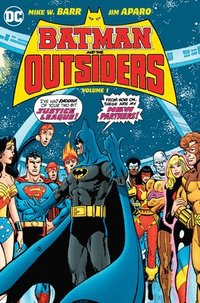 av Mike Barr
(1 röst)
Inbunden Engelska, 2017-02-21
709
Köp
Spara som favorit
Specialorder (osäker tillgång). Skickas inom 11-20 vardagar.
Fri frakt inom Sverige för privatpersoner.
In these tales from the 1980s, Batman splits off from the Justice League of America to form his own super-team known as the Outsiders. Including established heroes Black Lightning and Metamorpho as well as dynamic new heroes Katana, Geo-Force, and Halo, the team fought for justice on an international stage. Combining superhero action with espionage, the Outsiders brought their own brand of justice to Geo-Force's nation of Markovia, Katana's homeland of Japan, and across the globe.
Visa hela texten

Mike W. Barr has written for some of pop culture's most enduring icons, including Sherlock Holmes, Ellery Queen, Doc Savage, the Shadow, Captain America, the Hulk, Batman, Star Trek, Star Wars and The Simpsons. He also created some icons of his own, including the comic book series CAMELOT 3000, BATMAN AND THE OUTSIDERS, The Maze Agency, and Mantra. He has written for the online sites Icebox and Stan Lee Media (and lived to tell the tale), and co-created the web comic Sorcerer of Fortune. In 2003 Barr published the Star Trek novel Gemini, and he was a contributor to the Trek e-novel Mere Anarchy, published in 2009. His book on science fiction comics of the Silver Age, The Silver Age Sci-Fi Companion, was published in 2007 and was followed by the encyclopedic The Wolverine Files in 2009. In 2010 his original science fiction novel Majician/51 was released by the Invisible College Press.