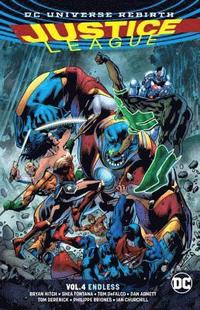 av Bryan Hitch
Häftad Engelska, 2017-10-10
149
Köp
Spara som favorit
Skickas inom 7-10 vardagar.
Fri frakt inom Sverige över 159 kr för privatpersoner.
The Justice League are dead. Manhattan is destroyed. And, somehow, it's all Flash's fault. A mysterious attacker with a mega-powerful weapon keeps targeting the Flash and those around him, blaming Flash for his family's death. Every time Flash comes into contact with the weapon's energy, he finds himself flung further back in time. The Flash is joined by Justice League member Batman--now can they solve the mystery and save the city before time catches up to their destruction once more? Writer/artist Bryan Hitch (THE AUTHORITY) is joined by guest creators including Shea Fontana (DC SUPER HERO GIRLS), Dan Abnett (AQUAMAN), Ian Churchill (TEEN TITANS), Tom DeFalco (SUPERMAN), Philip Briones (NEW SUICIDE SQAUD) and Tom Derenick (INJUSTICE: GODS AMONG US) as the world's greatest detectives face challenges they can't overcome with might alone! Collects issues #20-25.
Visa hela texten

"Every bit as epic and massive in scope as one would expect from DC's premiere superhero team"--IGN "JUSTICE LEAGUE delivers on its promises, and it's a strong sign of what's to come."--Comic Book Resources "Bryan Hitch knows how to deliver on action."--Newsarama

Bryan Hitch is a comic book artist and writer, best known for his time at both DC Comics and Marvel. Hitch's widescreen action panels and dynamic action sequences have made him one of the most sought-after artists in the industry. In his career, he's worked with some of the most renowned writers in the industry on several groundbreaking titles, including Warren Ellis (The Authority), Mark Waid (JLA), Mark Millar (Fantastic Four and The Ultimates), Ed Brubaker (Captain America) and Brian Michael Bendis (The Age of Ultron).